my acreage is in penn township

You signed that lease?

Can someone give me a website for Swepi? I was just contacted by Range Resources for $1500 an acre and 15 % royalties

But the future of SWEPI in Butler County is somewhat cloudy.  Perhaps FMV can look into his crystal ball!!

WSJ article on Shell.  Still clear as mud as to Shells intentions in Butler Co.

Thanks for the link but since I don't subscribe, so no love!

Sorry Phil, sometimes they will give you the linked story and nothing else, sometimes nothing I guess :)

Believe I saw a similar story somewhere else , have to root through the history.

so what does it say?

Ben van Beurden toiled in Royal Dutch Shell RDSA.LN +0.55% PLC's chemical-making unit for years, supporting an unpopular idea at the oil and gas company. He said Shell should be wary of "elephant projects" that cost billions of dollars and dominated the company's growth strategy.

The steep costs of oil and gas development from Canada to Kazakhstan, sometimes with little to show for the giant investments, came back to haunt Shell on Friday when it announced its first profit warning in 10 years.

The Anglo-Dutch company said it now expects fourth-quarter earnings of $2.2 billion, down about 70% from $7.3 billion a year earlier. Full-year earnings are expected to total about $16.8 billion, down from $27.2 billion in 2012. "Our 2013 performance was not what I expect from Shell," said Mr. van Beurden, who took over as Shell's CEO just three weeks ago.

The bad news is the latest sign of profit pressure squeezing the world's largest oil firms, including Shell, Chevron Corp.CVX +0.06% and Exxon Mobil Corp. All of them invested heavily on remote projects in places like deep water, frozen tundra and mountainous jungles. A surge in development costs and flat oil prices have made it harder to justify the costs of such projects, and the industry's giants arrived late to the shale boom in North America, overpaying for assets.

Shell, the world's second-largest publicly traded oil company by output, has been an especially big spender for the past decade. Shell estimated that its net capital-spending costs hit $44.3 billion in 2013, up nearly 50% from 2012. 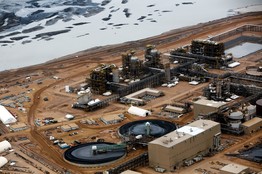 Shell has poured billions of dollars into Canada's oil sands. Its Albian Sands mine in Alberta. Bloomberg News

But some of the company's investments are struggling. Shell owns a stake in a Kazakh oil field that has cost more than $30 billion and is more than eight years overdue. Shell wrote down by more than $2 billion last year the value of its shale assets in North America. Sea ice and an oil-rig crash hurt an Arctic exploration project after an investment of more than $4 billion.

After spending billions of dollars to develop technology to extract oil from shale in the Rocky Mountains by freezing certain underground rocks and heating others, Shell abandoned a Colorado pilot project in about 2010.

Failures are a hazard of Shell's technology-heavy strategy, said Matthias Bichsel, Shell's director of projects and technology, in an interview late last year. "This is how we've pushed the envelope," he said. "We've tried, and it doesn't always work, but we have to be doing it."

Shell's bottom line also is suffering from a decline in the volume of oil and gas the company pumps from existing operations while it works on new projects. Meanwhile, profit margins on products from Shell's refineries are weak. 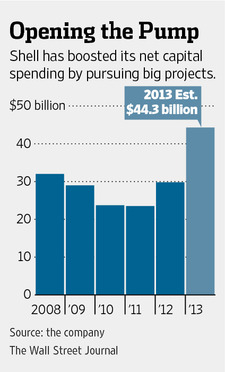 Shell's production division earned less per barrel of oil than Chevron or Exxon in the first nine months of 2013, according to analysts at Bernstein Research and Oppenheimer & Co.

Friday's profit warning pushed Shell's shares 0.9% lower in London trading. Profit warnings are rare among big oil companies, which usually churn out slow but steady growth. Shell's earnings projections were on a cost-of-supplies basis that factors out the impact of inventories.

Analysts and investors said Shell must rein in its spending, but that will be difficult because the company also needs to replenish the oil and gas it is pumping—and can't afford to fall behind rivals in exploration. "There is the need to invest and prepare for the next wave" of production, said Ivor Pether, a fund manager at Royal London Asset Management, which owned about $300 million of Shell shares as of Jan. 1.

The job of fixing Shell's cost structure belongs to Mr. van Beurden, a Dutchman who has spent 30 years at the company, largely in low-profile operational positions. During a stint as a vice president of "manufacturing excellence," Mr. van Beurden set standards for the company's refining and chemical divisions. Shell's exploration executives publicly touted new technological frontiers. 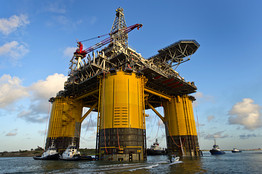 Track the performances of 150 companies as they report and compare their results with analysts' estimates. Sort by date and industry. 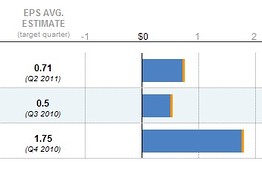 Shell revved up its capital spending after chronic under-investment led to a 2004 scandal over how Shell reported its oil and gas reserves. Shell paid $150 million to the U.S. and U.K. governments, and several top executives left the company.

"If you are good in technology, you're better applying it to something big than to something small," Mr. van der Veer told executives at a strategy meeting in 2005 at Shell's headquarters in the Hague, people who heard the comment recall.

That meant Shell would tackle what Mr. van der Veer called "elephant projects" too big or engineering-heavy for competitors. The company poured tens of billions of dollars into Canada's oil sands and a giant plant in Qatar that converts natural gas into synthetic diesel. Shell says the plant has been successful, but it had to reduce production recently for maintenance.

Some Shell executives advocated a more-conservative strategy focused on established, profitable oil-production areas, such as the Gulf of Mexico.

At meetings with other executives, Mr. van Beurden questioned if it made sense for Shell to bet so heavily on "big-ticket" projects. But he was running Shell's chemical unit and had no say over investments in exploration and production projects.

Mr. van Beurden stayed and got the same job when it opened up in 2012. Mr. van der Veer stepped down as Shell's top executive in 2009, and Shell said last summer that Mr. van Beurden would take over as CEO on Jan. 1, succeeding Peter Voser.

On Friday, Mr. van der Veer said he "will follow with keen interest what happens, but it's now time for new leadership to make up their mind" about Shell's strategy. Through a Shell spokeswoman, Mr. van Beurden declined to comment.

In a sign that Mr. van Beurden is willing to rein in spending, he was one of the Shell executives who decided last year to scrap plans for a $20 billion factory in Louisiana to turn natural gas into diesel fuel. The reason: The project was too expensive.

—Daniel Gilbert contributed to this article.

Write to Justin Scheck at justin.scheck@wsj.com and Alex MacDonald atalex.macdonald@wsj.com

Hated to copy the whole thing but.....

What does it say?????  Seems to me everything is stilll up in the air.

Thanks for posting that.  Since they didn't mention "Butler County, PA, USA" I have no idea what it means for this area.  Is the Cracker an "Elephant project"?  I hope not.

Ya Phil, Shell is so large and opaque it is really hard to make any kind of even a guess as to what intentions are.

Cracker- my gut is telling me it is a go... excellent location, infrastructure, labor force, etc...... then again it might just be gas! (pun intended) lol

ps: Sorry Kieth, did not really want to copy the whole thing to this thread... sorta getting off track ... could move this Shell stuff to another thread.