I’m bringing this topic over from the shaleforum. Does anyone know the intentions of these guys? As of yesterday they have leased over 10,000 acres(April 2017- present) in Knox county. Some info from shaleforum members include: they are paying $100/acre for all strata and East Ohio Oil and Gas is a shell company for Western Land Services. Any other information is appreciated.

Keep us updated Butch. It’s kinda exciting. Back in 2012 the Utica well drilled here didn’t meet Devon’s expectations. Maybe if these guys can get acreage cheap the economics will work for them.

Hey I just got on here again and saw this. Exploratory wells in the Utica Oil Window???? They can’t make oil in Western Guernsey, Tuscarawas or Coshocton, but Cabot thinks it can 50 miles west? Sounds good to me but I’m skeptical.

Not sure that's the Utica out there

I am also sceptical that the Utica play is what this is all about even though the standard lease document is for all depths. I dont think that they can drill to Utica shale levels on 40 acre squares? The flip side thinking would be why spend all the money they have spent for leases for ashallow layer??? Time will tell.

For those who didn’t read the article:

“George Stark, spokesperson for Cabot Oil and Gas Corporation, said the company is considering several sites around Ashland County for an exploratory well.

“We’re exploring many options,” he said in a phone call Monday afternoon.

Stark said the exploratory well allows the company to see what’s under the surface and determine if the site would be “economically viable” for future wells.

“You want to understand what’s underneath the earth,” he said. “We don’t have a sense yet what’s there.”

If the findings from the well show the site isn’t viable, the company will not move forward with any future work or wells, Stark said, something [that] “happens more often than not,” he said.

“It’s not producible. You can’t make energy out of it,” he said. “It isn’t the right composition.”

Stark said the company is in the process of talking with local leaders and landowners as the company’s geologists continue to research the area.

“We have nothing picked out in the sense of this is where we’re going,” he said.

The company’s geologists determined Ashland County might have underground oil or gas deposits.

Stark said he was unsure when Cabot began looking in Ashland County, and he said there is no time frame as far as how long the process might take.

At this point, Stark said the plan remains in the research process, with no on-the-ground work yet.”

—I don’t  think they are coming to Amish Country to drill Clinton wells. Lots of penetrations through the Utica up there in the past 5 years so lots of data if you want to pay for it.. Jim Aislandes has been drilling the Krysik (well below the Utica) up there in JV with Abarta Oil and Gas(Pa.) The JV is a Utica Shale participation agreement dated in 2012. The early exploits  of Devon Energy in the Utica Shale in Ashland has long been questioned. Yep we shall see.....

I think the only thing we can take to the bank is  EOO&G isn't going to produce one drop of oil or CF of gas, they are fronting for ???

We are a pretty good piece away from the NE corner of the county and Ashland county. I wonder if the leasing by EOO&G is the same deal as Cabot,,, or somebody else gambling that Cabot knows what they are doing up there? Or nothing to due with it?

No matter who it is I am betting that it fizzles and signed a lease yesterday. If I am wrong I have a lot of company, grins.

Another take on the Knox activity that I heard just last week is that the Devon well south of Mt Vernon is a whole lot better well than they let on and they have been letting the dust settle, and leasing rates go down before they let the cat out of the bag,,,, Suggesting that EEO&G is fronting for Devon,, a stretch,,,, but possible I guess? The activity by EEO&G has been well North of that,, at least the bulk of it that I am aware of. They have been beating land owners hard in the Green Valley area for about a year and a half.

Fun for me to talk about it (as you can tell)  and the initial check will be a welcome sight no matter what happens afterwards. r
Yes I’m pretty sure East Ohio Oil is leasing for Cabot. I’m pretty sure Devon has terminated everything in Ohio. The remaining wells were sold to Paul Archer a few months ago. For a fact some that recently have signed with EOOG were also signed with Devon. See attachment.... Red area would be the storage fields acquired from Columbia and the blue would be the area leased in 2017. 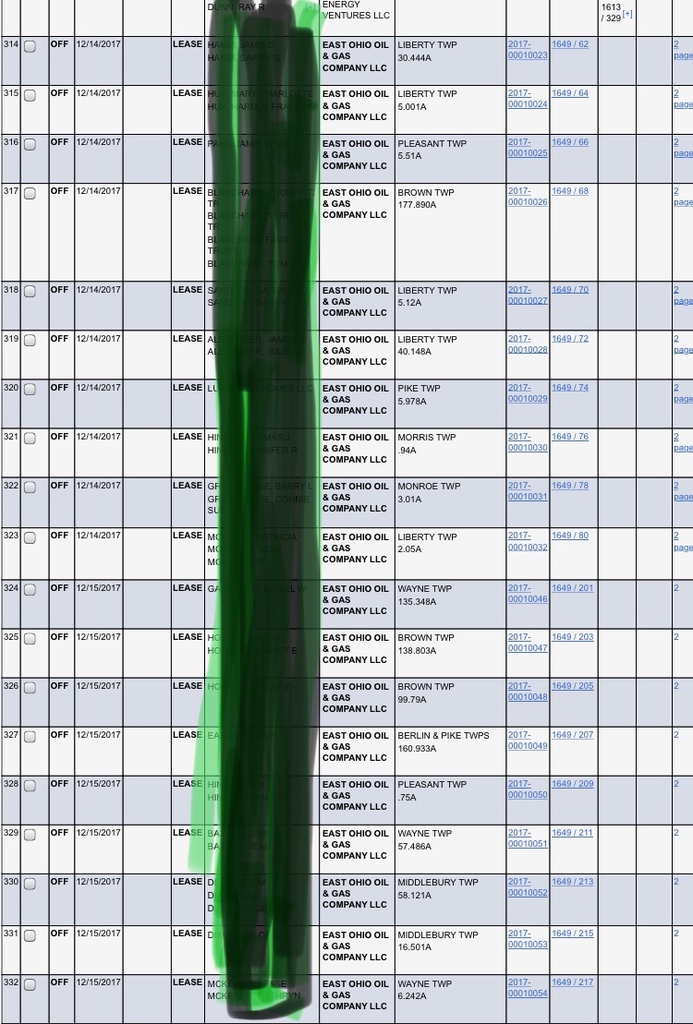 Just about another 1000 acres recorded the last 2 Days. These were signed in April 2017 so the land men are holding the leases as long as possible before they have them recorded. This could be a massive land grab in Knox County.

Thanks for those maps and info. My properties are in Wayne and Liberty twps, on the fringe.

No problem Butch. The landman told you they had around 44000 acres leased in the area......do you think he meant just Knox county?

He did not specify, I do know that they have signed up smany  of the larger land owners in tbe Green Valley area.