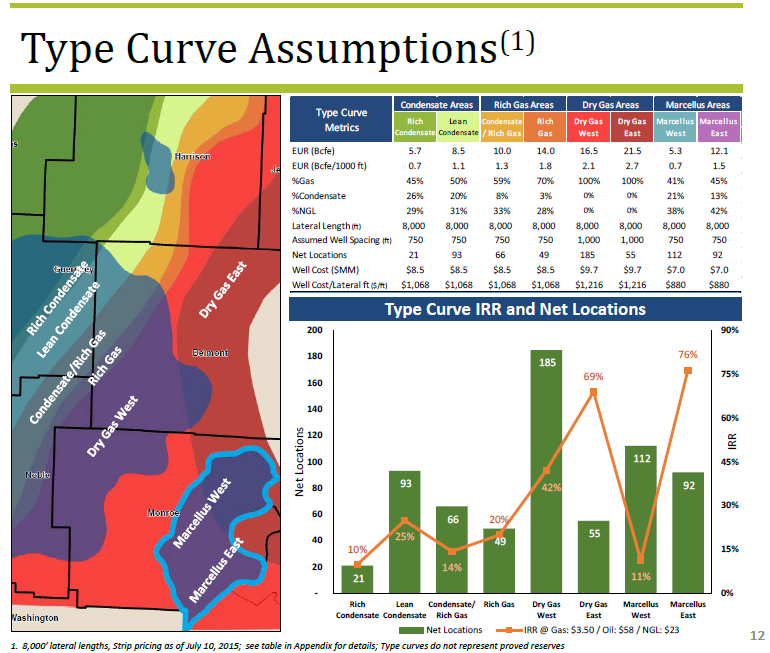 The screen shot above is from Eclipse Resources August presentation.   Check the Marcellus East numbers, they look good to me.    Eclipse has primary term lease on lots of acreage in Marcellus that expires in March of 2017.   Then another payment is due for the second five years.    This Marcellus area has the potential for a three pay zone return--Marcellus, Utica and Rhinestreet.

Interesting that as of Friday, Sept. 5 Eclipse already has landmen/women approaching lease holders to modify their lease payment terms to accept being paid the total due NOT in a one time payment as the lease states, but divided out over five years.    Interesting that Eclipse is working on this 18 months in advance of the March 2017 date.    So Eclipse leaseholders be aware of what you are being asked to do.

Permalink Reply by LERRET on September 18, 2015 at 3:21pm
If Eclipse goes to Chapter 11 or 7, you could get a really good screwing and I don't think there is a company out there that is "all in" the shale plays that cannot go under in the next 12 months. You are buying time for them, nothing more.

LERRET,   could you please explain this angle about how the landowner would get "screwed" if Eclipse went to Chapter 11 or 7.     Only one leaseholder I have encountered made this point, but didn't explain the implications to the landowner.

I have not seen the six page amendment that Eclipse wants signed.   However, their two selling points are by taking five payments there would be less tax paid and maybe after the 2016 election the Wayne National Forest will be more amenable to drilling.   Strangely today there is a discussion posted relating to the non drilling happening in the Wayne National Forest area where Eclipse is seeking this amendment.

This is the part I totally don't understand:   The lease is paid through March/April 2017.  But Eclipse wants to make the first of the five payments in January of 2016.   Then another payment would not be due till 2018.   If Eclipse is struggling for money why make an early payment to leaseholders?

LERRET thanks in advance for any insight you can offer this discussion.

Companies may have cash now, so by pre-paying they won't lose title to the leases in bankruptcy court.  I know that in Chapter 12, a farmer who owed FmHA money for a poultry barn and equipment, but a private party held the land title.  His lawyer told him to scrape up $5000 and put in CD in the name of the mortgage holder (an older farmer who has sold him the place).  They then waited six months to file.  In bankruptcy they claw back everything you are paid for the prior six months.  So the seller of the land had no reason to foreclose and FmHA was an 2nd lienholder.  In the court, they offered to pay $10,000 annually for 5 years and the court accepted it. FmHA didn't challenge it.  So resumed operations and paid $50,000, made a whopper of a bean crop and paid off FmHA on time, paid off the place and had money to spare.

When / if a company goes under, the court will hold your royalty check and very likely apply it to secured debt holders. At the best, you get your money very late..maybe 2 years from now.  If they can pre-pay bills now, those folks cannot bellyache.  And after six months, the BK court will not claw that money back.

There has to be a reason, and I would not trust the company to be transparent on this issue. I assume there are other reasons why they would do this. But face it. By spring there will be dozens of companies go under or merge, including some bigger names we all know.

The fracking companies are falling like leaves off the fall trees right now. And that all dominoes back down the line.  Why do you think Caterpillar is saying growth is slowing and they will lay off more workers over the next four years?  The sale of those big cat engines used in frack trucks and on drill rigs went from hot market a year ago to no market today.

BTW - those Type Curve Assumptions...note the fine print. (type curves do not represent proved reserves)....OK, then what do they mean?  I've run hundreds of them and most of the industry curves like this are wildly optimistic and most of these companies have always produced two sets of numbers. One for investors. One for the SEC.  And the numbers for the SEC are much more conservative.

I would assume the extensions are to help drilling that area efficiently.  If Eclipse has a drilling schedule with these lands to be drilled as is without the Forest, then I would assume they will design those units that way.  If they can extend it by a year or two and get the forest approved to drill, the units might fit better.  So, it appears they are willing to pay at least one more year (to 2018) for some possible movement in the forest land.  They are willing to pay that first year upfront today instead of waiting until 2017 to benefit you.

Every year they do not pay, you will receive another bonus check.  It doesn't seem like a bad deal.

Lerret is giving you a doomsday example.  I would be careful reading too much into that, unless he/she has some kind of inside information.

Eclipse's stock is tanking quickly. Closed today at 2.42 and one of its partners in some joint agreements, Magnum Hunter, closed at 38 cents.

So is Eclipse headed for bankruptcy or  modifying their lease to  sell some prime acreage to a big time player in order to raise cash to stay afloat?   Eclipse can't have too much of a drilling schedule in the area with few pipelines in the WNF area,and the price of gas/oil.

As far as WNF goes the line is that Eclipse has the permits to drill.  Can one believe that?  If they have the permits why haven't they tried a well that includes WNF property?

And lol over the years I haven't seen an o/g company that has done something for my benefit.

Eclipse signed the leases, they are adults, they can suffer the consequences.

How many times have you signed a bad contract or lease then were allowed to modify the document with an addendum in order to improve your position? The answer is NEVER!

But, but, we are your friends give us a break.

Landowner gullibility is what makes the Domestic Oil & Gas business so profitable. Producers pay as little as possible to landowners, take billions, then buy those they need to continue shorting the landowner royalties. Take a look at the Demchak vs Chesapeake settlement if you disagree.