Gas Prices & the Mineral Owner: Begins with a Glut (Part 1) 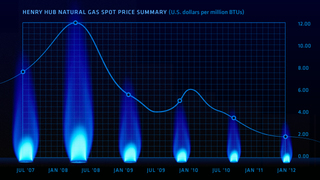 U.S. natural gas production has experienced a boom over the last decade due to new drilling and extraction techniques allowing gas companies to extract minerals more efficiently. This has resulted in a glut in the market for natural gas such that the industry anticipates storage capacity will be completely exhausted in the near future. Just how significant is the increase in production, and how has the massive surplus come to be? The growth in U.S. natural gas production averaged 63 billion cubic feet per day in 2012, representing a 24 percent increase from 2006. However, in this same period, production outpaced consumption two-fold.

As in any market where a commodity is in such abundance that it outpaces demand, there will be pronounced pressure to lower prices. Natural gas has experienced this same phenomenon. Historically, natural gas has been 10 times cheaper than crude oil. Presently, natural gas is approximately 35 times cheaper than crude oil. Natural gas prices reached their lowest level in a decade during early 2012. Although gas prices have increased over the past year, prices still remain low, as demand has yet to catch up with the vast supplies on hand. Analysts indicate that prices are likely to remain comparatively low for the foreseeable future, which is causing a shift in thinking about drilling and extraction operations.

The positive? This glut has benefited businesses and homeowners that use natural gas, as well as those landowners who have been able to benefit from the drilling boom. However, with natural gas prices having hit a 10-year low, gas companies have fallen victim to their success. Some of the largest natural gas producers, such as Chesapeake Energy, ConocoPhillips, Royal Dutch Shell, BHB Billiton, and Encana, have indicated that they will scale down production as a cost-cutting measure in response to the down market. It is anticipated that the efforts to scale down because of the current market conditions will involve slowing production from existing wells or even stopping production at some wells. These companies are also redirecting their spending away from the development of new drilling operations and are implementing cost-cutting measures on existing projects, as many projects initiated during the 2009-2012 gas boom period are now valued below their purchase price. A report earlier this year by Bloomberg indicates that acquisitions of North American energy assets dropped to the lowest level since 2004 during the first half of 2013. These conditions, according to some analysts, will persist.

In the face of a flush market, low prices, and scaled-back growth plans. This problem is made worse by the fact that companies who acquired substantial debt on shale acreage are discovering that drilling programs on this property are not lucrative enough to justify continuing at the status quo. According to a New York Times article published October 21, 2012 the top 50 oil and gas companies raised and spent an annual average of $126 billion over the last six years on drilling, land acquisition and other capital costs. With natural gas prices effectively bottoming out in 2012, gas companies are left scrambling to reconcile these investments which have decreased significantly in value. So, how where does a cash strapped exploration company get some cash?

In part 2 we will look at lease/royalty litigation trends...

Fundamentally it is a three level situation. a] the people holding the land and leases  b] the oil & gas companies and c] the really big money people. That's how it is set up, plain and simple.

For the people in a] be patient. Time and money speaks.

although I am not a fan of the 1%,many of these money sources are Funds made up of smaller investers.I also wonder if there is a fourth level like more CNG vehicles on the road with more stations, also the gov,who coulds give grants and or tax credits for people to change from fuel oil to gas in some form so that home heating would be affordable.

simple answer...export...sell it and make money instead of sitting on it and lose money!...way too complicated for this administration to understand!

WHy? if we allow our infrastructure to catch up,then we can keep the price low to consumer in this country.

why..because I and a lot of other people that could use the money may be dead before it catches up!

That's right spend it all. Give it away. Make sure there's nothing left for your children and grand children including heat and fuel.

then why export our corn, wheat, beef or anything else...keep it here so the prices will fall and our economy can collapse.  joe, please do some reading and educate yourself on how free markets work!

So what your saying is you want to exercise your right to sell out  all your natural resources export them to drive up the prices and leave your children and grand children with nothing so you can live high off the hog for the moment till you blow it all and end up with nothing? Fine ,but don't try to talk everyone else into selling out their children's future ,heat, resources, money in the bank so to speak. Human nature shows us that most people maintain a level of wealth. Everyone has their own level. Shown time after time alter that level by inheritance, lottery, or other one time wind falls is only temporary. They will blow it and in short order be back at the same level they started at or worse even homeless. The most public examples are lottery winners. Lets start a new topic (Who has any bonus money left after 1, 2, 3,4,or 5 years.)

I'm with Joe here. I think it is great prices are low. It is making things much more affordable for people, and cheap energy is better for the country as a whole. To me it is very short sighted to pray for a quick buck, which means large exports and high prices. The whole idea of finding new supplies to keep costs down. That's why our country is 17 trillion in the hole. We have to many gimme gimmeis.

Oh, and the comparison to exporting corn and other crops is way off base. Why? Because you can grow corn! Can someone tell me how to grow Utica Shale, because Exxon would sure like to know....

Permalink Reply by Dan on October 31, 2013 at 7:21am
The air is cleaner because of NG. Maybe we will all live longer?

Those of us who have read recent articles about those O&G companies that have found ways to cheat the land owners, know additional reasons why gas prices appear to be low.

1) Sell the gas to one of your own companies at a below market price, pay the landowner a royalty on the bogus sale, then sell on the open market.

2) Use the gas in your equipment miles from the well it was taken from and pay nothing for your energy use.

4) Use 5 different company names each headed by the same CEO. Sounds like a shell game is ahead for the landowners.  You can see these documents in the Carroll County Recorders office.

5) The US government was cheated out of 3 billion and had to go to court to recover their money. Why would a landowner be more feared than the US Government?

"It's too hard to figure out how they are cheating us and how much is being stolen".

Just sit the CEO and all his people down in a court room, put them under oath one at a time, and ask them how they are cheating the people. Then lock each one of them up when they tell a lie under oath, the same way I would be treated for being a thief and lying under oath.

See you in court.