The W.H. Sammis power plant on the Ohio River is FirstEnergy's last coal-fired power plant in Ohio. State regulators today approved a company proposal to have its Ohio utilities -- the Illuminating Co., Ohio Edison and Toledo Edison buy all of the Sammis power output, even though it is more expensive currently than power from competitors. Customers will pay extra to save the power plant.GARY TRAMONTINA

COLUMBUS, Ohio -- State regulators have approved what they describe as a modified version of the FirstEnergy request to have customers subsidize the continued operations of Davis-Besse nuclear power plant and the coal-fired W.H. Sammis power plant.

Customers will be forced to buy power from the old plants even when cheaper power is available.

The PUCO has approved an arrangement in which FirstEnergy's local distribution companies such as Ohio Edison and the Illuminating Co., will buy electricity directly from Sammis and Davis-Besse at whatever the cost and then bid that power into competitive wholesale markets, where it would sell for less, at least in today's markets which are dominated by gas-fired competitors. Customers would make up the difference with an extra monthly charge.

Filed in October 2014, a couple of months after FirstEnergy, AEP Ohio also asked for an arrangement to have customers subsidize a number of its oldest coal-fired plants; but unlike FirstEnergy, the company has agreed to shut down coal plants at future dates and to build wind and solar farms -- if the PUCO has customers pay for the projects, just as customers once did before deregulation. Those wind and solar projects will be debated in future cases.

"Although the Public Utilities Commission of Ohio modified the settlement agreement, they did recognize the significant benefits of this plan for Ohio consumers. This plan will ensure more stable electricity prices in Ohio and promote the development of new, renewable generation to support the state's economy," said Nicholas K. Akins, AEP chairman, president and chief executive office, in a prepared statement. The company must also in the future modify its current rate plan to extend it to eight years, an unprecedented length.

Here are summaries of the two FERC cases:

By John Funk, The Plain Dealer 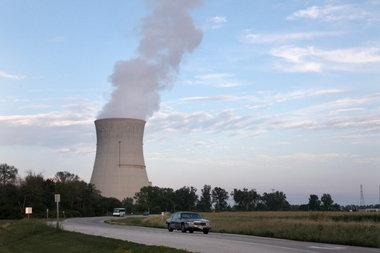 The Davis-Besse nuclear plant east of Toledo on Lake Erie would have received subsidies paid for by consumer surcharges under a plan approved unanimously by the PUCO but rejected unanimously by the Federal Energy Regulatory Commission, or FERC, on Wednesday. The company has not decided its next step.PD file

CLEVELAND, Ohio -- The Federal Energy Regulatory Commission has pulled the plug on FirstEnergy's "power purchase agreements" that would have forced customers to pay extra monthly charges to guarantee the profits at two old power plants.

In a unanimous ruling issued late Wednesday, the FERC said that while state regulators have a role to protect retail customers, the agreements proposed by FirstEnergy and later by American Electric Power include a federal issue precisely because "captive" retail customers would not have the ability to escape the extra charges.

Those monthly surcharges would go to each company's  unregulated subsidiary which operate power plants and function as wholesale operations under FERC's review.

In their arguments convincing the Public Utilities Commission of Ohio to approve the power purchase agreements, or PPAs, the companies relied on a waiver of federal rules the FERC gave to them in 2008.

That waiver made it possible for the power plant subsidiary companies to compete in PUCO-monitored wholesale auctions to supply power to the local distribution companies such as the Illuminating Co., Ohio Edison and AEP's Ohio Power.

In contrast, the proposed power purchase agreements unanimously approved by the PUCO would have been created to protect the power plant companies from competition under the guise of preserving future rate stability -- and only legally possible because of FERC's prior waiver of federal rules forbidding such closely affiliated companies from doing business within one another.

The FERC ruled that only it has the authority to decide whether such deals would protect customers and meet federal standards requiring market competition.

The FERC rescinded its previous waiver and demanded that the companies -- if they still want such deals --  submit the plans for federal review. Neither company has yet decided whether to do that.

"Clearly, we are disappointed by FERC's decision as we firmly believe that our PPA will benefit customers by protecting them against rising retail prices and volatility in future years. The arrangement also will help avoid up to $4.1 billion in additional charges to Ohio customers for new transmission projects," Todd Schneider, spokesman for FirstEnergy, said in written talking points.

The PUCO believing that FirstEnergy's future was at stake, had wrestled with the cases for 18 months before unanimously approving the Akron-based power company's plan March 31, as well as the "me too" request from AEP.

FirstEnergy had argued before the PUCO that without the special deals, it could not guarantee that its Davis-Besse nuclear plant or coal-fired Sammis power plant on the Ohio River would survive.

But Wednesday, just hours before the FERC ruling, top executives told analysts during a public teleconference that the power plants would be profitable this year,even without the PPA subsidies from customers.

Here's how the PPAs would have worked:

The  PPA contracts would have allowed the unregulated subsidiaries of both companies, which now own the power plants, to sidestep the tough but mandatory competition involved in selling the electricity they generate into regional wholesale power markets. Instead, they would have sold the power -- at whatever it cost to generate -- to their local distribution companies, which in turn would immediately bid it into the daily and hourly wholesale auctions supplying power from Ohio to the East Coast.

If the local distribution companies, such as the Illuminating Co., Ohio Edison and AEP's Ohio Power, lost money selling the power into interstate markets, customers would make up the difference with higher delivery charges.

Even customers who had contracted to buy power from competing companies would have had to pay the extra delivery fees.

Trade groups representing out-of-state power companies which already have thousands of Ohio customers free to "shop" for the best rates took their complaints to the FERC even before the PUCO rejected them.

The Ohio Consumers' Counsel, the Sierra Club and a host of other organizations joined the federal case opposing the deals.

The Consumers' Counsel estimated the power purchase agreements, or PPAs, would have forced Ohio consumers to pay an extra $700 to $1,100 over the next eight years.

Consumers' counsel Bruce Weston said FERC's ruling "has the potential to save each of several million Ohio electric consumers hundreds of dollars over the next eight years, while protecting the competitive market envisioned by the Ohio legislature in 1999."

Calling FirstEnergy's purchase agreements "a bailout," attorney Shannon Fisk of the non-profit firm Earthjustice, representing the Sierra Club before the FERC, said he doubted the PPAs would survive FERC's scrutiny.

"There is a strong case that the transaction cannot survive such review, as the bailout represents little more than a sweetheart deal that would force captive customers to ensure the profits of FirstEnergy and its shareholders," he said.

Schneider said the company is now evaluating its options, which could include seeking a rehearing of FERC's order, as well as filing the PPA for FERC's review. "It's always been our position that the PPA will satisfy the FERC's criteria for an affiliate contract," he said.

This article has been corrected to reflect a more accurate and detailed explanation of the FERC's entry into the power purchase agreement controversy.