What follows is a discussion in which I will post/share industry related articles that I believe to be of general interest to some who frequent this site.

It seems that the Majors (particularly the Europeans .... Shell and Statoil) are having trouble making money in the Marcellus/Utica.

HOUSTON – Southwestern Energy Co. said Tuesday it is planning to snap up Statoil’s 20-percent stake in oil and gas assets in West Virginia and southwest Pennsylvania for $394 million, just a day after closing its biggest-ever deal with Chesapeake Energy in the region.

The transaction, which encompasses 30,000 net acres, boosts Southwestern Energy’s working interests in that area of the Marcellus and Utica shale plays by 5.8 percent to 73 percent. The wells on the land produce about 29 million cubic feet of gas a day, as of October.

The deal is expected to close early next year. It’s the Houston natural gas and oil producer’s third proposed acquisition since October.

It had bought $5.4 billion worth of gas land from Oklahoma City-based Chesapeake, though the final closing price fell to $4.98 billion by Monday. And earlier this month, Southwestern agreed to acquire more nearby acreage in Pennsylvania for $300 million.

All told, the Chesapeake and the Statoil acreage amount to 443,000 net acres in the gas-rich region, cementing its bet on natural gas at a time when oil prices have fallen dramatically. 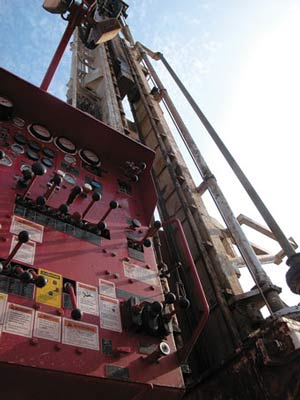 Scattered along the western part of Tyler County are newly quiet natural gas drilling rigs, their pumps no longer moving up and down like a 24/7 see-saw.Truck traffic rumbling through here, and jack breaks thumping loud enough to disturb the circuit court and commissioners meetings, have slowed.

Scattered along the western part of Tyler County are newly quiet natural gas drilling rigs, their pumps no longer moving up and down like a 24/7 see-saw.Truck traffic rumbling through here, and jack breaks thumping loud enough to disturb the circuit court and commissioners meetings, have slowed.
At restaurants here and 12 miles away in Sistersville, business is down. The county's only hotel has witnessed a decline in oil field worker occupancy, one major account having canceled rooms for the winter.

"It is not dead yet, but it is slowing down considerably," Charles Winslow, owner of the Historic Wells Inn in Sistersville, said of the recent natural gas production decline.

Across central West Virginia something very strange is happening. The economy is still booming because of natural gas, but virtually all the fracking crews have packed up and gone home for the winter. The roustabouts were told sometime in November “don't call us, we'll call you” as a glut of cheap natural gas could send prices to a 10-year low.

So what is going on? The answer depends on who is speaking.

Lower natural gas prices and the glut in the Appalachian basin has some companies reporting surging production, while sending employees home for the winter with instructions to return in the spring.

The simple answer is that natural gas prices, for six to eight months of this year, have been $1 to $2 below the national benchmark of approximately $4 per million British thermal units. Lower prices have not hurt many of the big players or forced them to dial back production. However, it has hurt smaller operators.

If prices decline to around $2 per million British thermal units, everyone from the big players to the independent operators — who most likely would not survive such rock-bottom prices — would feel the effect, analysts and executives said.

Production is increasing because energy companies are discovering more efficient and cheaper ways to extract natural gas from the Marcellus shale formation.

Drillers rarely have an advantage. They were able to lease land and sign good deals on pipeline usage without going deeply into debt. This allows them to survive another couple of years of oversupply and near basement-level prices, analysts predicted before Christmas.

Some companies have not had to worry about the economics of their wells. During third-quarter earnings calls with reporters and analysts over the past two weeks, many companies said they still got bargain price deals from long-term contracts or agreements on pipelines that ship to more profitable markets.

Range Resources, Southwestern and Consol Energy and some other drillers said they can maintain a growth phase despite the lack of pipelines.

“There's going to be sort of a survival of the fittest occurring on who has liquidity and who has the acreage position to stay on the production ramps,” Consol's CEO Nick Deluliis told reporters during a recent conference call. “Not everyone's going to be able to do that, so there will be a supply response. We've seen it many, many times and I don't think this time will be any different.”

Another factor is Wall Street. Hedge funds are dumping bullish natural gas positions as a slow start to winter signals a return to the 2012 supply glut.

This month alone, natural gas prices have dipped 23 percent, heading for the biggest monthly tumble since 2008, according to the U.S. Energy Information Administration. Surging production and milder weather this year created a record stockpile.

“If heating demand doesn't start to pick up, we're going to be below $3 by the end of January," John Kalduff, a partner at Again Capital LLC, a New York-based hedge fund that focuses on energy, told a Pittsburgh business journal. “Supplies are formidable.”

Natural gas for January delivery went for $3.144 per million British thermal units during trading Tuesday on the New York Mercantile Exchange. The Exchange, closed on Christmas, was down 32 cents and at the lowest price since Jan. 9, 2013.

Temperatures currently may be above normal in the eastern part of the U.S., but around New Year's Day they will become seasonal. An early outlook by the Commodity Weather Group shows colder-than-average weather in the eastern half of the country starting in January.

The EIA estimates that nearly half of American homes use gas for heating, which could pull the industry out of the slump if this winter mirrors last year's.