Map of Halcon Cherry Pick Shaded in Gray the Winners 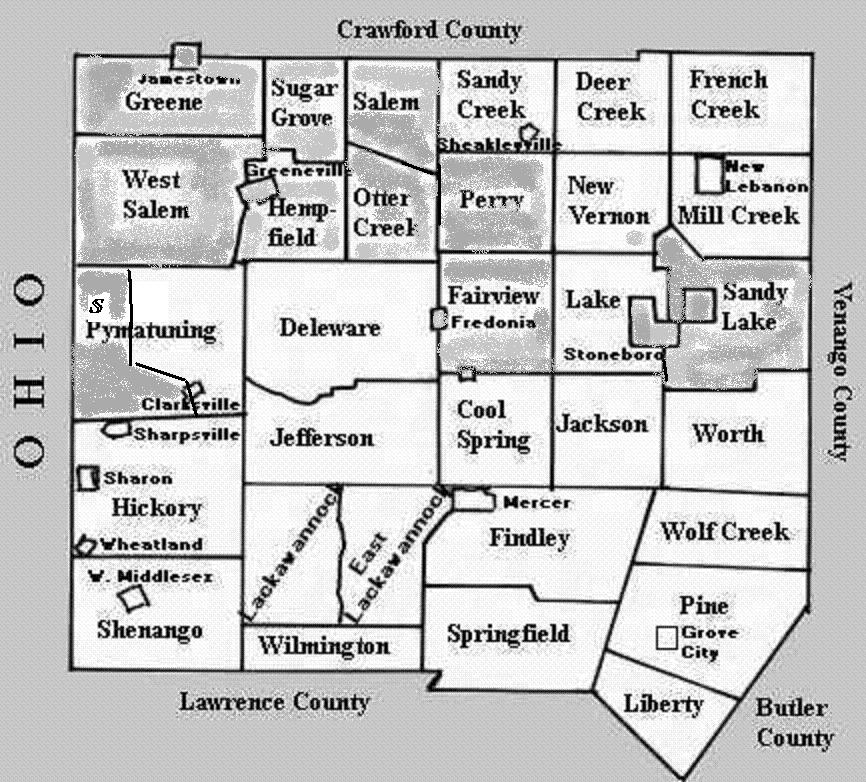 What can anyone make of this decision?

Why was this the best? Too many Hilcorp leases in the other Twps? Lack of money? Geology?

that's what we've done in Crawford Co. - we have a little more than that and have an offer on the table.

I feel bad but yet I don't - a LEASE IS A CONTRACT and before anyone signs any contract, they should do their homework or get advice of an attorney or at LEAST understand an offer is not a 'done deal'...

Permalink Reply by jason smith on September 15, 2012 at 12:43am
If they hit oil in Pulaski, as reported on here all of Mercer county looks good.

Perhaps its more geological info that has come in which makes a lot of the county less favorable, plus the difficulty in many places of putting together 640 acre blocks when other companies have heavy footprints. i remember a recent post suggesting that the wet gas boundary may be somewhat west of what previously had previously  been thought. (May have been an Ohio posting) Also there was a thread entitled the Hilcorp disappointment. Do not know if the Hilcorp well in question is in Lawrence or Mercer County or if it really turned out poorly. Since M&P did the Mount Jackson/ Hilcorp deal. perhaps they could prepare a map coloring all the Hilcorp acreage yellow, and the entire Mount Jackson 4 acreage  in green and red. Green being used for the properties that Halcon proposes to pay for. I also recommend Elnathan, that you spend some time on the Pa Department of Environmental Resources site. Click on Marcellus and you kind find details on each county for 2009 to 2012 showing county by county how many wells have been permitted and how many drilled for each of the years listed. It tells you how many of the wells drilled were conventional wells and how many non -conventional. I am not good with the computer, but I would advise a co-operative and organized effort to synthesize a lot of information from multiple sites. I do think putting together parcels into blocks of contiguous parcels of 640-1280 acres makes sense where it is possible. Because your property is next to Hilcorp property they may want yours. If their recent well results were disappointing, they may want it for a reduced bonus payment. I have been perhaps too hard on M&P in prior postings. It may be that all of their prior deals included the same broad due diligence language that is in the Halcon/Mount Jackson 4 leases; but that no other O&G company had ever employed it to selectively avoid paying bonus money as Halcon is attempting to do. Getting back to the possible adverse new geological information. If you except Sandy Lake township; then it looks like Halcon only wanted land that is predominantly in the Northwest quadrant of the county. If this is correct, then we all need to figure out why this might be the case?  My own property is in the Northwestern quadrant of Venango County several miles to the east of New Lebanon. Halcon seems to have lost interest in my area and there are some postings suggesting that they are very selectively paying  bonus money on previously agreed upon leases. I would also pay attention to where any property is being leased in Crawford County to see if it is all in the western portion. This might suggest a new geological consensus about the location of the eastern boundary of the wet gas area. I do not think much is going to happen this year. Most O&G companies have either spent or allocated most of their budgeted money for 2012, so I do not expect much to happen until Spring. Hope this post stimulates a lot of responses. I hope some of my rambling thoughts are helpful.

I have added circles to show where Hacon has a high concebtration of leases with the MT Jackson 4 group. Read my recent post under thread entitled "Halcon". I think it explains exactly what strategy  Halcon is employing in Mercer County and elsewhere. Please add your perspectives or criticism but I think I am on the right track. Looks to me like they are doing in other counties about what they did hear. I now believe had you leased to them directly, they still would not have funded your lease. I do think you are potentially one of the lucky ones because your acreage is substantial and you are adjacent to Hilcorp. They probably will want your property, but might pay less if geology now looks less favorable. Good luck.

This is only our second post after the news came out.

Not that it means a lot but, Sandy Creek twp should be gray also.

Your circles not only indicate a high concentration of leases but also the most contiguous acres. The 2 circles in the southeast corner are in an area that is "iffy". Some maps show this area could be dry gas and some show it could be edge of wet gas / dry gas. The west central and northwest corner, as far as I can tell, are considered to be "oil - wet gas" and potentially higher value. Remaining twps had low acreage sign-up or were to the southeast corner.

We are in the same boat as you; not in a "gray" twp - by less than a mile! Are we disapointed? Yes. Are we distressed? No. Do we want to hear what they have to say Tuesday? You bet we do!

However, we have been following GMS and geology data for nearly a year. While I am not a geologist, I am educated in the sciences and here are our steps and thoughts as we went through this process:

b) "Wet gas" from the southwest to the northeast.

( Initial thought - 3 areas of leaseing based upon value. )

a) Local offers were dreadfully low.

5+ COUNTIES! Would have been OK with this IF they were willing to recognise the

difference in geology. Durring the Q&A I asked a detailed question about the

differences in geology. The answer was 7 words - " We want the same for ALL

( Thought - In our situation, monitor closely but, move on ).

( Thought - In our situation, Cx is looking good )

( Thought - Really belived the county would be split into 1/3rds).

( Thought - Entire county, We are VERY nervous but, great lease! )

Vista I am told has large presence in Northeast Mercer County. They are apparently going to form a joint venture with Shell. The postcards announcing a meeting about this on September 25 were sent to Vista's lessors only and described it as a public meeting, but card did not specify that the meeting was for Vista lessors only. People who got the cards told their friends. Potential result is a whole lot of people who are not Vista lessors are going to show up. I am not a Vista lessor but the mailing was to Vista lessors only. I am posting this as a sort of public service announcement. The issue needs clarified. As my friend insists, the postcard says it is a public meeting but I can't convince him that its only for Vista lessors. I post this here because possibly Vista/Shell might be interested in the properties rejected by Halcon or at least some of them where Vista already has a heavy presence and because I do beleive the meeting is only for Vista lessors.

You are correct on all accounts. Geology is as you have described. I have corrected my map to include Sandy Creek Twp and Sheakelyville. Halcon has cherry picked using contiguous concentrated leases and geology as their guide as you have said. Not a suprise by any stretch. Too bad they broke their promise. Hopefully I can break out of my agreement with the group and go out on my own. 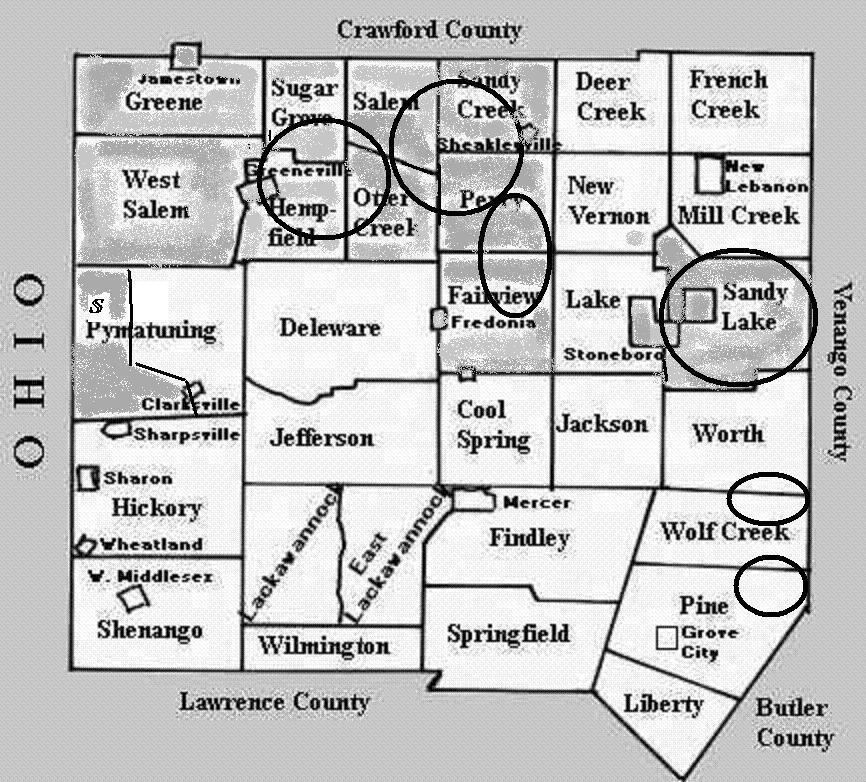 I will be at the Sandy lake meeting; should be interesting. We are looking at other options as well. Good luck and let us know your thoughts on the meeting and how you make out.

Thanks Samuel, you are correct.

I have a couple neigbors leased with Vista. They are going to give us the details of the meeting.