The dropping price of wind power

Carl Pope, the former Executive Director of the Sierra Club, and Michael Bloomberg, former New York City Mayor, are leading an effort to combat global warming even without leadership from Trump or Congress.

map shows cheapest electric power source, by county, as of 2016. green is wind. orange is natural gas. purple is solar. 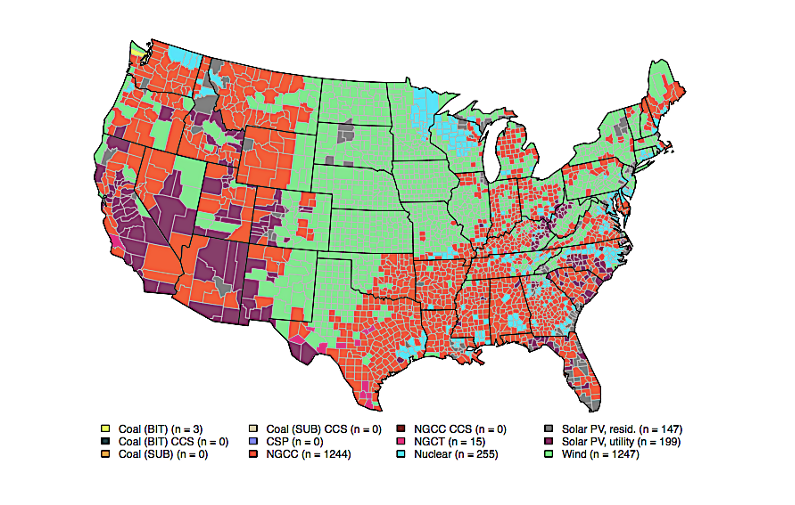 The rates are based on a self serving  study which has cherry picked info. So, it's  conclusion are false.

Next, did you see the recent report that renewables are the least eco-friendly forms of energy production?

In order to produce the very special components of wind turbines, solar panels, etc. the processes cause more  ecological destruction than coal.

Bring back the mines!

Renewables are a false panacea.

Just came back from Colorado yesterday via I-70.  Passed three major windfarms in eastern Colorado and western Kansas on Thursday, thousands of windmills, only a handful were turning at midday.

I have been reading up on the operational costs of wind farms lately and found many surprising  facts. These sources were primarily  non-ideological, professional sites that delved into the nuts and bolts of what is involved in keeping wind farms, both offshore and land  based, running throughout their expected 20 year  lifespan.

Yes, that is - surprisingly - correct.

These whirleys only last about twenty years and decline significantly in performance as they age.

Doing repairs 400 feet off the ground, way out in the middle of nowhere, is more expensive than merely calling the local repairman.

The UK government released a study a few months back showing that wind energy across the country averaged 9% of rated power over the previous year - every 100 megawatts claimed of wind power produced on average 9 megawatts: not a very good efficiency!

Permalink Reply by Jon on July 7, 2017 at 10:07am
They're ignoring the fact that if demand went down there would be less drilling and the price would go back up. Dishes, makeup, toys and all kinds of other stuff would then be much more expensive as a byproduct of this. It's not like wind speed is consistent either. It's total pipe vision. Not to mention the environmental consequences of wind power.

Permalink Reply by Jon on July 7, 2017 at 10:10am
Or electric cars for the matter. When compared to making a gas tank, batteries are extremely resource intensive and cause lots of pollution in manufacturing. People are so naive.

I still don't see much concern from the environmentalist about bird strikes.  If the oil industry was killing 325,000 birds a year, the Sierra Club would be having convulsions.  Before Obama left office he approved the increase in allowable eagle strikes by over a thousand.  I've never understood what that means.  If you kill the eagle quota, are the wind farms supposed to shut down?  I doubt that.  I still have questions about taking migratory patterns into account when placing or operating the farms.  At what point does the loss of such a large number of birds create a hole somewhere in the environment?  Wind farms are going up like crazy, and I believe bird strikes will grow exponentially.  Rolling it back will be difficult.  Money and electrical dependency will not allow it.  This is the beginning of a potential ecological disaster.  I'm not against any form of energy, per se, but there are a lot of questions to be answered, and the answers are not simple.  Bottom line though, wind energy is not totally "Green."

Would like to see a map of the percent electricity produced by each source.  While wind might the least expensive in PA, I'm sure that it is dwarfed in production by coal and natural gas.  Anyone have a source for such a map?

Talk about screwing up the surface. Nothing is uglier that wind turbines. They aesthetically ruin  the landscape. From the corn fields of Indiana to the pristine seascapes of Hawaii they are a blight that needs to go away.

Take away the government subsidies and wind and solar and battery cars are big losers!  We will all be pushing up daisies before they become our major source of power!  That article is total bs.