The Many Ramifications of the Great Oil Plunge of 2014

Most Americans are rejoicing at the big drop in gasoline and heating oil.  They are also counting a drop in air fare, food clothing, and other products as energy drops.  Landowners are worried about a drop in royalties. But CNBC, FBN, and other financial media say there are many more potential affects of the plunge, not all good.

A drop in employment is expected in the energy field as drillers cut back. As energy has been the largest driver in employment, that could hit the national rate.

Many of the most leveraged companies will either be bought out (Talisman was bought out just hrs ago) or go bankrupt.  This will affect investors from stock and bond holders to banks to investment firms  How will that ripple through the financial system?

Many hedge funds are heavily linked to energy stocks and bonds.  And it was hedge fund failures that led to the financial collapse in 2008.  Will we see a repeat of 2008?

The Russian ruble is in free fall since oil is Russia's only export. The ruble collapse of 1998 set of a global currency crisis. Will that scenario repeat?  Will Putin lose power or will he do something extreme to remain in power?

Many European countries are strongly tied to the Russian econ through exports and financial investments. Will the ruble free fall and/or a drop in exports take down the Euro econ?

Iran is also in huge trouble with oil so low, how will the mad mullahs react?

Venezuela and Brazil are seriously hurt since they are huge oil exporters. Will this affect the Latin American econ and bring down the US econ?

Lots more possibilities that none of us can foresee.  A drop in oil is good but this may have been way too far and way too fast.

Demand is slowing.  That is a fact.  And the Saudis are not increasing supply.  They have instead chosen not to cut the supply for now.  Their forecast for next year is ~300,000 bbl lower than previous estimates.  There is clearly a slump in demand.  OPEC nations can survive for maybe two quarters at this rate.  This pattern will not hold.  Supply will be cut and prices will stabilize.  It's just a matter of who can make it to the other side with the least damage done.

The fall of oil prices, which is due to Saudi Arabia turning the valve full open and flooding the market with plentiful oil thus lowering the price of that commodity

The only problem is that OPEC has not increased their production. They have been within a fairly narrow range for some time, and only picked up production when Libyan production collapsed after Khadafi fell.

It may take awhile but oil will rebound . Though oil prices might go lower , NOW is probably a great time to buy oil stocks .

The only way CHK would make money would be to have Anadarko take them over and pay a premium.   It would be a worse purchase than Bank of America buying Countrywide.

Look for companies that have low leverage. The companies with debt are in real trouble, especially if funded by junk bonds...the notion that they are "hedged" on oil prices doesn't mean a thing if the hedge fund blows up. That happened in Tulsa in 2008 when an outfit went under betting the wrong way on oil.

Market May Be Looking to Find a Bottom After Recent Falls 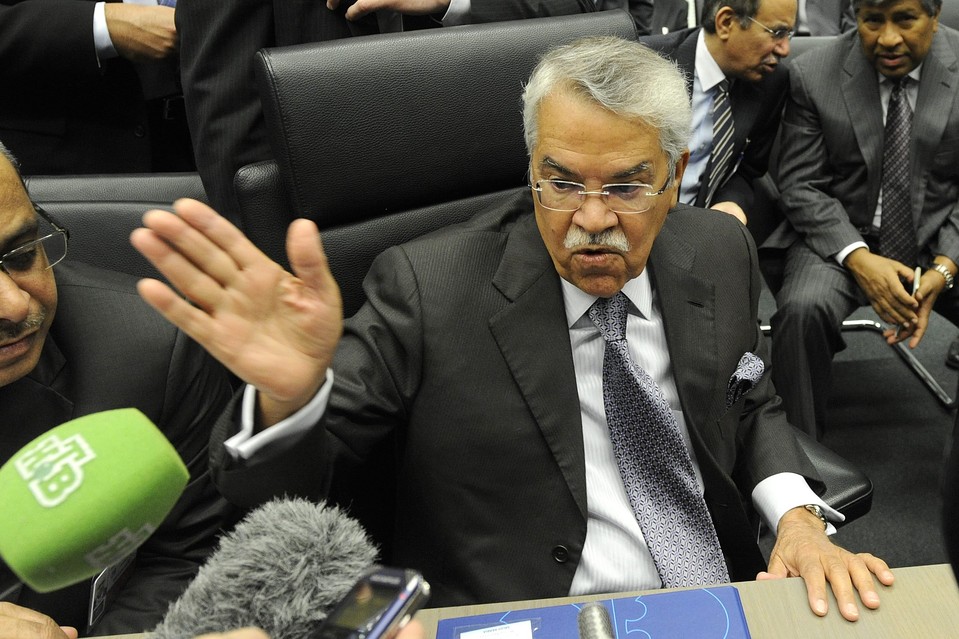 LONDON—Global oil prices rallied on Thursday as signs were emerging that the market might be looking to find a bottom.

Bulls received a boost after Saudi Arabia’s oil minister characterized the recent price rout as “temporary,” predicting that demand for the commodity will improve.

A selloff that started midsummer wiped off nearly half of crude’s value amid concerns of global oversupply coupled with lackluster demand.

On Thursday, Brent rose 2.5% to $62.77 on the ICE in London, following Wednesday’s gains when it snapped a five session losing streak. U.S. light sweet crude was up $1.30 to $57.76 in electronic trading on the New York Mercantile Exchange.

Ali al-Naimi, Saudi Arabia’s oil minister and one of the world’s most influential oil brokers, said that as the economy improves, so will demand for crude. In an interview with the official Saudi Press Agency, Mr. al-Naimi reiterated his stance that the Organization of the Petroleum Exporting Countries won’t cut output and blamed the oil price volatility on speculators.

“The market has been looking for an excuse to rebound and his bullish comments were the perfect excuse,” said Tamas Varga, an analyst at PVM. “When al-Naimi speaks, the market listens.”

The rally helped drive stocks as well. Persian Gulf stocks, which tumbled into bear-market territory in the past few weeks, rebounded sharply Thursday, while European stocks and U.S. stock futures also climbed, helped by the Federal Reserve’s message a day earlier that it would be patient in deciding when next to raise interest rates.

Analysts cautioned, however, that oil’s rebound, which started on Wednesday when both Brent and West Texas Intermediate shot up by more than 5% at one point, wasn’t driven by fundamentals. Crude surplus is still building up in the physical market and is expected to persist well into the first half of 2015, which will have a bearish impact on prices.

Global energy companies have scrambled to adjust in the face of an uncertain outlook. Chevron became the latest big name to scale back, telling Canadian regulators Wednesday that it has “indefinitely” suspended plans to drill for oil in the Arctic.

Other companies including Marathon Oil, Husky Energy and Penn West Petroleum have pared their capital spending plans in recent days.

“The fall since summer was overdone, too quick and too sharp, and traders might be looking to pick a bottom and gain some money out of it,” Mr. Varga said. “But this is a temporary relief, at best.”

News on Wednesday that Iraq’s Kurdistan would increase its oil exports next year also seemed to be overlooked by the market.

“Given that oil prices no longer reacted to this news by falling to new lows, short positions were doubtless covered,” Commerzbank said in a note to clients. “Nonetheless, we are skeptical about whether that means we have seen an end to the downslide in oil prices.”

Any recovery in oil prices is also capped by the strengthening dollar, which rose further on Wednesday on the Federal Reserve’s comments.

“A temporary relief might be around the corner, though it would be suicidal at this point to look for a long-term bottom,” Mr. Varga said.

Nymex reformulated gasoline blendstock for January—the benchmark gasoline contract—rose 3% to $1.61 a gallon, while ICE gas oil for January changed hands at $567 a metric ton, up $19 from Wednesday’s settlement.

—Summer Said contributed to this article.

Write to Georgi Kantchev at georgi.kantchev@wsj.com