Does anyone have some guidance on understanding how EQT determines what specific acres make up an allocation area for a well?

I own some acreage in Whiteley Twp / Greene Cty PA and have been placed in an allocation area for a well where the lateral runs in the complete opposite direction of my acreage. Not even close to my land. Puzzling.

I am also interested in hearing about this as it would seem there is a 'directional' aspect in play.

Of course other factors come into play in describing the 'formula'.

From your response it appears you have knowledge of the drilled directions already.

Do you contact ODEP for their approved plats map?

JK, thanks for responding.  Yes, I do have knowledge of the direction of my lateral as well as others on the pad. I pulled from the MarcellusGas.org site. They all run northwest and my property runs southwest from the pad. I am still awaiting the Division Order as they neglected to send it when they should have to better understand the formula. I just do not understand why we are in an allocation that does not even touch our acreage.

If Chesapeake set the standard for how Units are assigned, this information may be helpful.

I know that many O&G companies follow the lead of the O&G company that is the least honest with US Landowners since Greed is a highly infectious "business practice" for those who believe they are above the law, or know that those who protect US Citizens have been compromised.

What Determines A Well Unit?

Chesapeake didn't define how they would determine a Well Unit making that call as flexible as possible, allowing them to take a look then "do what is best for them" in each situation.

The Buck Well in Carroll County, Ohio has two Units, a North and a South. All horizontals drilled to the North included all acres they placed within the Unit. Same with the Southern Horizontals. All Landowners are equally stolen from in the North, as is done in the South, even though only one Horizontal was drilled in each direction. Held by Production was the name for this game.

The Paige Well in Columbiana County, OH had the first Horizontal for the 5A Well to the North declared the North Unit. To ensure Held by Production Chesapeake made laterals that ran 1,268 feet to the West and 500 feet to the East since one landowner owned all of the land to the East, while in the Westerly direction all Landowners were declared under production by 0.5 acres.

Please Stop Reading Here so as not to distract yourself from the main subject, which may lead to fits of anger in some.

Patriots who want to know the future, you can continue reading.

If God hadn't stepped in, I would advise all Landowners to sub-divide their farms into small parcels prior to O&G arriving in the area, to prevent the Held By Production scam.

This would be a good time to remind All Ohio Landowners not to sign anything O&G, the World is about to change for the better and those documents signed prior to May 2019 are VOID due to the fact that the laws of Ohio were violated in EVERY O&G/Real Estate document signed prior to this date.

There are additional laws that were violated during and after the signing of these documents which legally voided them. Theft By Deception on a scale that meets the definition of RICO Fraud (Ohioans will need 3 times their losses due to this law) and Deception In Writings. It is illegal in Ohio to obtain an Ohio Citizens valuables by using a verbal or written document that fails to fully detail what that Citizen is giving up or in other words a deceptive document is used.

Justice will be served after a Century and a half of theft by O&G companies from US Citizens.

Did you lease with EQT? When? Did a landman bring out a proposed unit map? Do you have a Tax Map Parcel # for your land/minerals?

I did lease with EQT a number of years ago. Feel good about the deal cut. It is the Stattler Well Pad.

James, Greene Co Courthouse has a Declaration of Unitization filed by EQT on this unit. It does not have the final map showing the finalization of the unit yet.  It will provide you with the final unitization map and permit map showing all included in this unit and the the final legs, lengths and spacing provided for that unit. One thing to look for is where your parcel sits and if EQT is using half or all of your parcel in the unit. This is where a Pugh Clause comes in, if you had it put into your lease. Both Parcels for you and your wife totaling around 79 / 80 acres are in the Declaration page, but doesn't mean they will use all you acreage unless you would be placed in the middle of the final unit. You can get on US land records under Greene to view it. BK # 521 Pg 1649. It does cost to view. Nothing looks drilled at this time. 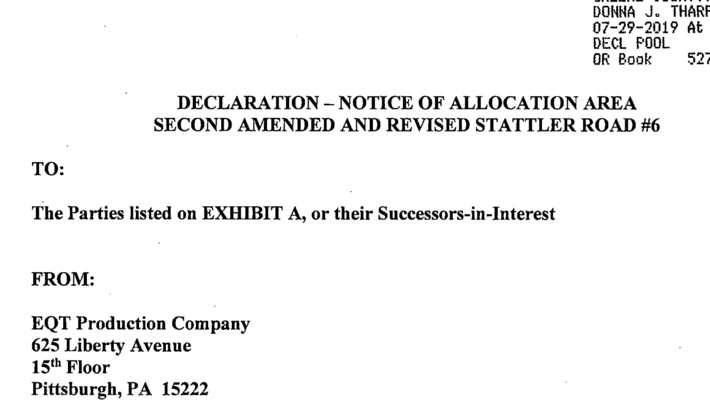 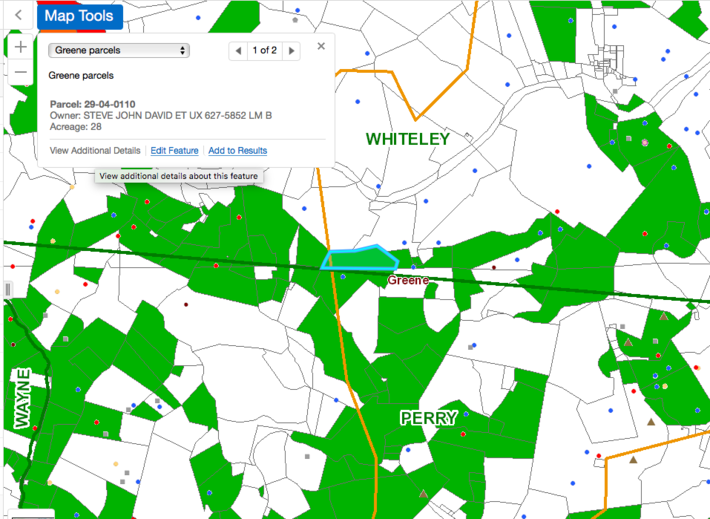 Thanks...I do have a Pugh clause in the lease. I have been on the PA Land Records site and have seen this document. EQT is producing from 6 wells on the Stattler Well Pad and I am linked/getting paid from one but it is less than a small amount. What mapping software are you using? I am fine to wait but just seems odd that they would place us in an allocation that runs in the opposite direction.

The software was made for my company and it is usually updated every few days from the PA DEP. Please feel free to PM me if you would like to chat.

It sounds like they put you in the unit to tie up your property for the future. Isn't this a good thing?

Good question regarding whether it is a good thing....not sure.  I assume they would only tie it up if they thought it would be productive and want to sit on it till prices improve and it is profitable to pull from the ground. Then it is a question of how long that takes.

If they put you in a unit that already has laterals drilled then you will be getting royalties once the well goes into production. Which should be sooner rather than later.