U.S. natural gas production continued to increase in August despite relatively low natural gas spot prices, setting a new daily production record of 92.1 Bcfd on August 5, 2019, according to data from OPIS PointLogic Energy. Natural gas production increased by 1.5 Bcfd (2.5%) between May and August 2019, led by production gains primarily in the Northeast. The northeastern region continues to be the largest natural gas-producing region in the country, accounting for 34% of the U.S. total. Average daily production levels in that region reached a new high of 32.2 Bcfd in the first week of August, 1.5 Bcfd higher than its monthly average in May. 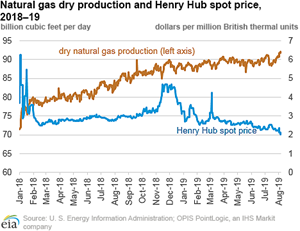 Natural gas spot prices have been on a downward trend since early spring. Henry Hub spot natural gas prices are at a multi-year low, despite storage inventories ending withdrawal season at their lowest levels since 2014. On Monday, August 5, the spot price of natural gas at the Henry Hub closed at its lowest price since May 30, 2016, at $2.02 per million British thermal units (MMBtu)—down from $2.95/MMBtu on March 15.

Natural gas storage has been absorbing a significant amount of this production. This injection season started with working natural gas inventories 30% lower than the previous five-year (2014–18) average during the same period. By the week ending August 9, working gas inventories were at 111 Bcf, or 4%, lower than the five-year average of 2,849 Bcf. EIA forecasts that natural gas storage levels will be about 3,700 Bcf by the end of October, which is slightly higher than the five-year average.

NC6648 added a discussion to the group Penn Land Owners