According to Laura Legere in today's Scranton Times:

Eight of the 10 top-producing wells for the half were Cabot Oil & Gas Corp. wells in Dimock and Springville townships, Susquehanna County, including the top producing well, the King 2 in Dimock, which produced 3 billion cubic feet of gas.

Sounds like Cabot is making a positive and an appropriate response to the situation.

hey tom... just wanted to pass on something I found interesting if your still following this part of the thread. It's a 2010 PA DEP report regarding o&g well construction rules. It mentioned something I had been wondering about; casing failures per well drilled. I have a water well and will be living VERY close to one  these gas wells soon so it was a obvious concern for me. ( http://www.personal.psu.edu/ree5047/media/marcellus_proposal.pdf )

The part I found most interesting was the following:

"DEP predicts to issue approximately 5200 Marcellus well permits in 2010 (Wilber). Given the amount of documented methane migration cases in comparison with the total count of active Marcellus wells, the odds of fresh water contamination resulting from poor well construction is approximately 0.03 or 1 out of every 30 wells. This translates to approximately 173 potential disasters when those wells begin construction, a very scary and possible reality."

The regulations have been changed since then so the odds are going to change for the better obviously but it shows want a overwhelming problem that PA DEP originally encountered and the future reality of methane migration and how to deal with it.

I wasn't trying to minimize the problem, only place it into a little bit of perspective. Let's start with one assumption--no one ranging from PADEP, to gas drilling companies, or local landowner/landlords want you to ever experience any problems with your drinking water. Natural gas migration is a fact of life in areas that are sitting on top of massive hydrocarbon deposits. Your water is not polluted with methane, even if there are zillions of little methane bubbles in it. Methane is a non-toxic, oderless, colorless gas that is lighter than air, and if given a chance through venting, will naturally exit your well water. I'd call it more of a condition, that may cost some bucks to correct, but is fixable.  The bubbles will completely disappear out of a glass of water sitting out in the open after only a minute or two.

Most of the issues simply boil down to money, and who is going to pay for making sure homeowners continue to have that nice crystal clear water that everyone wants to have. The Penn State report may have been a little over-dramatic when referring to "173 potential disasters" unless they were suggesting gas explosions or cases of asphyxiation. These are pretty rare, because people take precautions and vent and/or aerate their wells. More likely, these homeowners will be able to light their tap water on fire, which I would call more of an idiot's delight than a potential disaster. Who knows? It might even lead them to a role in the Gasland sequel.

Companies drilling the wells know that there is a great deal of naturally occurring methane in the areas where they are drilling. If a homeowner already has methane before drilling, obviously the company doesn't want to foot the bill for fixing it. However, if methane migration can occur as the result of something as simple as changes in barometric pressure, then any kind of ground disturbance that occurs with drilling, could obviously stimulate migration too. It's more a question of who gets stuck with the bill for restoring the aesthetic quality of the water. Perhaps a qualified attorney could best advise you on that, but obviously having before and after (drilling) water tests available would give any homeowner a very strong hand in collecting damages from the drilling company.

Since, as you mention, regulations are getting more strict, the issue of shoddy well casings that cause methane leaks, is possibly overblown.

Check out who else thinks shale gas development is a danger to drin...  Politics makes strange bedfellows, eh?

Thanks Russia Today for this fine example of "Chicken Little" reporting.  Not suitable for small children to watch. Too scarey!

Actually, COG is number two if you look at EUR's. 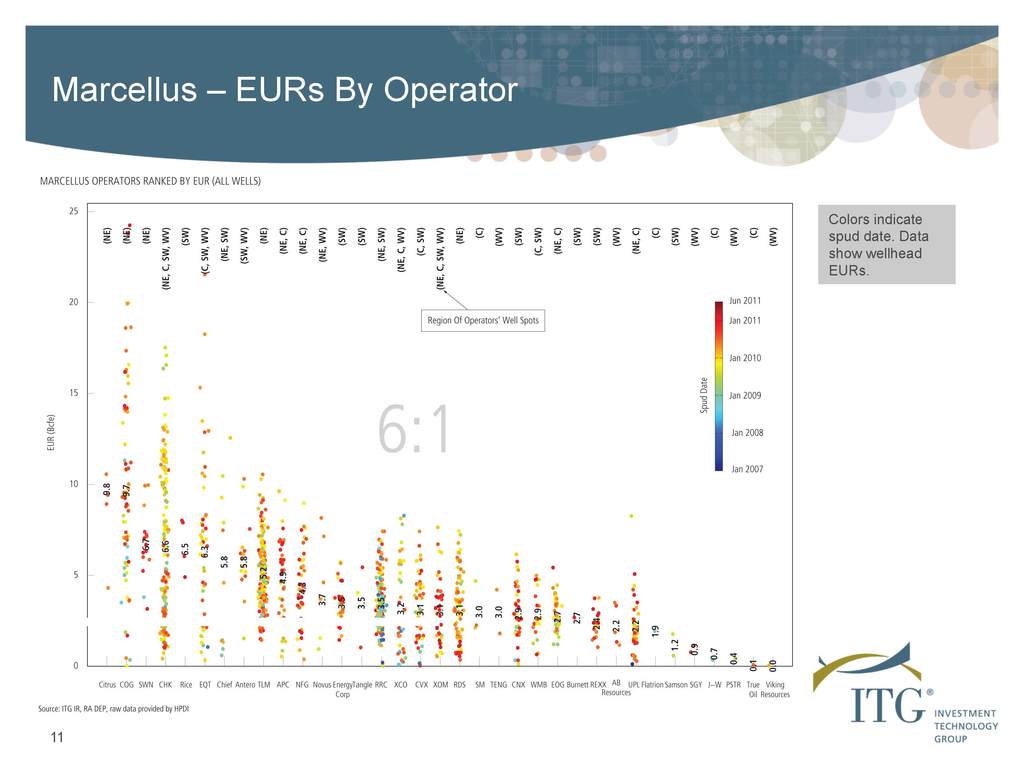 I would have said CHK is overall industry leader in the Marcellus, yet in terms of having wells on an individual basis that are the most productive, it is COG. Of course, that's not to say CHK does not produce more natgas in the play than COG. It has scads more wells in so many different locations besides Susquehanna County. Am I right, or wrong on that, Jim?

Making a horse race out of it is kind of silly anyway, and I did not mean to do that. There are many fine companies in this play, so who is first in someone's book makes very little difference. The point I was trying to make is that if you wanted to smear ONE company, truly one that is a trail-blazer in production using a campaign of negative PR, Cabot certainly makes a very attractive target. Sorry, if this sounds a little bit cynical to some people. It was never intended that way. I have made understanding smear campaigns kind of a specialty over the years, and try to view them with as much dispassionate objectivity as possible.

I live near (30 minutes away) Dimock and have seen some the sites there. When I first read about the amazing results there a few months back I wondered what the size of those units were. Do you think they are typical 640s or larger? I  have also been reading recently about "super frac'ing" and wondered about that. I know that the Marcellus is very thick in that area.

I was merely making the point that "top producing wells" is somewhat of arbitrary term that depends upon the metrics you use to measure a successful well.  Did these Cabot wells produce a significant amount of natural gas over a period of time...unquestionably.  Does that make them the team to beat?  Not necessarily.  Are there other wells belonging to other producers that have the potential to produce as much or more gas than these Cabot wells, possibly.  There are a lot of reasons why producers don't, can't or won't produce wells at the rate Cabot chose to.  Pipeline capacity restrictions often play a role as do the pipeline pressures that wells have to compete against.  Producers have different perspectives on whether it is advantageous to produce a well at the maximum rate that it is capable of.  I'm not taking anything away from Cabot.  Maybe looking at producing well rates is akin to the old tortoise and the hare fable.  Slow and steady might win the race.

The metric referred to in Laura Legere's article was average daily natural gas production per well over the previous 6 month period. Prof. Engelder, quoted in the Legere piece, alluded to the fact that 6-month data is not always the most meaningful that you can use--monthly data would be an improvement, at least so far as estimating ultimate recovery.

I have to agree with you on one thing. EUR (estimated ultimate recovery) tells us more about how commercially successful the well will be over the long haul. It is only an estimate, and depends on the decline curve that you assume. I know you realize this, but wanted to clarify. Your point about slow and steady growth is also very well taken. One reason it's true though is that the pacesetter tends to make itself into a target. Then it is the "team to beat."

I don't disagree with you Tom.  In a thoroughbred race they call that frontrunner a pace horse or a rabbit (I believe) they typically "use up all their speed" and are rarely close to being in the lead at the finish line.  Time will tell if that is true of Cabot.  One thing I can assure you of is that when the next semi annual set of production is released Cabot won't have the well with the highest average daily production!

That's an interesting tidbit to learn. Don't suppose it has anything to do with the Susquehanna Co. acreage on Hwy. 706 CHK picked up in its farmout with Epsilon Energy? As you said, we'll see whether COG has held anything back for the home stretch. Personally, I only take "sure bets", so my money  is on the industry, never one particular company.