Jackass "science" - Here is what we're up against

Read here how the idiotic (man-caused) global warming believers attack us with their abundant lies and distortions:

It is true fracking will not impact global warming.  But this is because (man caused) global warming does not even exist.  It is instead a figment of evil liberals' vivid imaginations, a means to their hoped-for political ends.

Stephen, more proof that you were correct and as you said just "thousands of loonie scientists who are pushing this crazy notion that man might be capable of damaging the environment!"

Reports: There Is No Global Warming

You’ve heard how the Earth is rapidly heating up . . . causing drought, famine, and mayhem.

For sure, Al Gore and the media encourage you to jump on the global warming bandwagon every time there is a heat wave or when a photo of a lone polar bear floating on an iceberg emerges.

But how much has the world really warmed?

It’s an important question, considering the U.S. government spends $22 billion a year to fight the global warming crisis (twice as much as it spends protecting our border).

So, has anyone stopped to ask . . . how much has the globe actually warmed?

Well, we asked, and what we found was striking.

According to NASA’s own data via Remote Sensing Systems (RSS), the world has warmed a mere .36 degrees Fahrenheit over the last 35 years (they started measuring the data in 1979).

Hardly anything to panic about; however, that does mean the world is warmer, right? 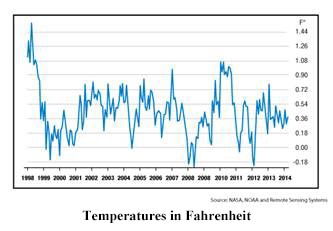 The problem with that argument is that we experienced the bulk of that warming between 1979 and 1998 . . . since then, we’ve actually had temperatures DROPPING!

As can be seen in this chart, we haven’t seen any global warming for 17 years.

Weakening the global warming argument is data showing that the North Polar ice cap is increasing in size. Recent satellite images from NASA actually reflect an increase of 43% to 63%.

This is quite the opposite of what the global warming faction warned us.

In 2007, while accepting his Nobel Prize for his global warming initiative, Al Gore made this striking prediction, “The North Polar ice cap is falling off a cliff. It could be completely gone in summer in as little as seven years. Seven years from now.”

Al Gore could not have been more wrong.

However, despite this clear evidence that the temperatures are not increasing, the global warming hysteria only seems to be increasing.

For example: President Obama himself tweeted on May 16, 2014: “97% of scientists agree: climate change is real, man-made and dangerous.” John Kerry, Al Gore, and a host of others have championed this statistic.

Since then, it has become clear that this statistic was inaccurate.

The Wall Street Journal went as far as to say, “The assertion that 97% of scientists believe that climate change is a man-made, urgent problem is a fiction.” Forbes headlined “Global Warming Alarmists Caught Doctoring ’97% Consensus’ Claims.”

Come to find out, the study President Obama was citing was botched from the start.

A host of other problems for the global warming crowd are emerging, such as . . .

It is becoming harder and harder for the global warming community to ignore some of the scientific data that show the Earth is not getting warmer . . . instead, the world is getting cooler.

Which makes one wonder — why are we still spending $22 billion a year on global warming initiatives, and where is the money going? (Click Here to Read a Controversial Report on This Topic.)

Suggested Reading for You: A former White House adviser and NASA consultant reveals startling proof that the global warming faction is hiding the truth . . . and gets attacked. Click Here.
Jack says: Move along folks, nothing to see here!

Looks like it's time for NASA to return to the mission bestowed upon them.

Permalink Reply by stephen weiss on October 19, 2014 at 9:14pm
Jack
I appreciate your response, with citations.

I have found, and I think you may agree, that when scientific arguments begin with name-calling ("jackass", "idiot", "lies", "evil") little is accomplished. Your efforts to elevate the discussion is not noted.

Nonetheless, I seems unlikely that the issue will be resolved in the current format, and I plan to comment no further in this thread. I anticipate no complaints will be forthcoming.
After reading your linked document,do want to make a couple closing comments.

I am unimpressed with your two scientific "experts" cited in the last link. The greatest accomplishment of one is his formulation of an improved gun barrel coating. Not sure how that qualifies him as an expert on climate. Not clear how the other guy (Casey) is expert in anything, except that he formerly was govt contractor for NASA. And his comments about the price of oil are comically wrong!

I have given you the courtesy of reading your links. I would only request that you Google "NASA Climate Change", which provides quite an interesting summary of the evidence in support of this concept. Many of these reports from highly reputable sources directly and clearly contradict your statements.

Perhaps 97% of scientists are not in agreement with the idea that man is contributing to climate change. Maybe it's only 90 or 95%. But let us at least agree that it is not "idiotic".

RE: "Perhaps 97% of scientists are not in agreement with the idea that man is contributing to climate change. Maybe it's only 90 or 95%."

Maybe it is only 15% or 10%   .... however one thing is certain, the number of scientists who support Global Warming/Climate Change/Climate Disruption decreases every day, as the scandals associated with falsification of data appear, as the damning emails between Michael Mann and the University of East Anglia are published, as model after model is shown to fail in their predictions.

RE: "But let us at least agree that it is not "idiotic"."

I do agree that it is not "idiotic"; what has occurred is beyond "idiotic" .... in the case of some of the alarmists, it is criminal .... they should be prosecuted for fraud.

Sorry to hear that you have reverted to that group your mentors disdainly refer to as  the "useful idiots'; for a short while, I thought that you were better than that.

The news is that the informed have seen through the sham.

Permalink Reply by jason smith on October 17, 2014 at 1:35am
Al Gore is getting rich off spreading the myth of global warming, and he will not debate anybody with different views.

I understand the debate regarding validity of so-called "climate change".

Unfortunately, this debate is FAR FROM irrelevant to our fortunes as in-the-shale landowners.  Instead, the liberal loonies are using (nonexistent) "climate change" in efforts to crucify and impugn us and the natural gas lying beneath our lands.  They fanatically, vigorously, and endlessly attack ALL FORMS of fossil fuels.

And friends:  Natural gas is a fossil fuel!  When they attack fossil fuels they are directly attacking US!!

This is not something anyone here can afford to forget or ignore.  The "global warming" crackpots must be opposed at every turn.