Anybody heard of these guys out of Houston?

Permalink Reply by Bluejack Farms on August 16, 2015 at 4:55pm
Not sure Joseph. Maybe different formations react better to different directions. I think it has something to do to the natural faulting of the formation.

Permalink Reply by James Vanderink on August 17, 2015 at 4:37pm
I guess if your going to drill a horizontal Trempeleau well Morrow County is where you start.
Thoughts Dexter Green?

I mean, that's the place to be for that formation, but I'm still trying to wrap my head around the concept of horizontal wells into traps.

The horizontal portion goes through EOR's other Trempeleau wells. Got to think this is some type of secondary recovery. 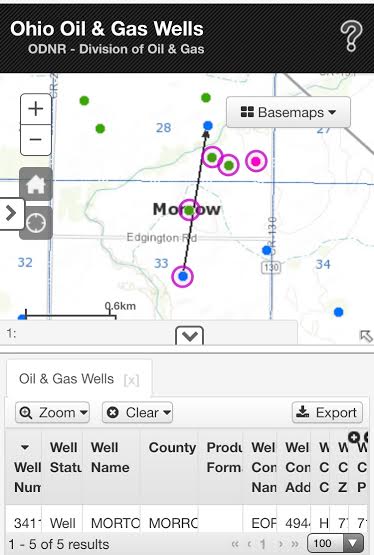 Concentrated in central Ohio's Morrow County, the Trempealeau oil play has proven to be the most prolific in the state's recent history. Unrestricted producing rates and the relatively shallow depth of 3,000 ft have created an added incentive to finding the scattered Cambrian erosional remnants that comprise the productive areas. Approximately 413 wells were completed in 1964 and Trempealeau production from the Morrow pool during the year was almost 11 million bbl. The producing reservoirs are vugular dolomite with evidence of vertical fracturing. Average core properties include 7.8 per cent porosity and 49 md permeability. Average per well recovery from an analysis of 75 wells is 68,000 bbl, while individual well recoveries have ranged up to 500,000 bbl. Primary recoveries from the better areas are predicted at around 30 per cent of the oil in place, a particularly high figure considering these are predominantly solution gas drive reservoirs. Secondary recovery will be a challenge to operators since conventional methods do not appear favorable in view of current data. This paper presents a summary of Trempealeau reservoir performance, particularly the Ashland development in the Morrow field.

In April, 1960, gravity-magnetic surveys were begun in Morrow and adjoining counties by the United Carbon Co., since acquired by Ashland Oil and Refining Co. These were prompted by regional geologic studies of the Appalachian basin conducted several years earlier that indicated a favorable area in north central Ohio (Fig. 1). Several of the gravity-magnetic leads were followed by seismic surveys, and a large anomalous area was defined in Canaan and Cardington Townships of Morrow County. After a lease block of approximately 6,000 acres was assembled, the Orrie Myers No. 1 discovery well was drilled and completed in June, 1961. Well potential was 2,000 bbl of 42 degrees API gravity crude per day from the Trempealeau formation of upper Cambrian age. Accelerated leasing campaigns followed the discovery and drilling reached boom proportions by early 1964. At the end of 1964, there were over 500 Trempealeau producers in Morrow County and 10,666,000 bbl of oil had been produced during the year. Although finding the scattered and relatively small Trempealeau producing pools has become increasingly difficult, active drilling still continues and leasing of potential Cambrian areas is tight throughout Ohio.

Peak activity in Morrow County was reached during the latter part of 1963 and early 1964 when oil was discovered underlying the Mt. Gilead and Cardington townsites. This was before the advent of a 10-acre spacing regulation, and the find resulted in a flurry of drilling by a number of independent operators who had leased townlot tracts. Also, several other prolific producing areas were found (results in Fig. 2). Oil production increased from 2,000 BOPD midway in 1963, to a peak of almost 33,000 BOPD in April, 1964. Trempealeau producers increased from 30 by end of 1962 to 106 by end of 1963 and 519 by end of 1964. Although many of the wells were drilled with little or no reliable geologic data, the over-all drilling success ratio during the past year was approximately 30 per cent, representing 402 producers and 928 dry holes. The three most active operators realized a success ratio of almost 60 per cent for approximately 220 wells.

Permalink Reply by Bluejack Farms on October 20, 2015 at 12:06pm
http://galioninquirer.com/news/4534/morrow-countys-first-horizontal...

Permalink Reply by James Vanderink on October 22, 2015 at 1:18pm
Looks like a Utica style drilling pad. Can anyone in the area comment if a rig is up? I'm just curious who was contracted out for the drilling.