Regulation of industry good for our health

It's a good thing we have the Environmental Protection Agency (imperfect though it is) and laws like the Clean Water Act to protect our health from corner-cutting industries. In Mexico, their laws and enforcement are weaker, and people are dying as a result.

Thank goodness we created the EPA decades ago. Remember how Pittsburgh's rivers used to be dead like this? If you care about the air and water we are consuming, voting from Republicans and Trump is the last thing you'd want to do. "House Republicans will roll out a regulatory approach today that "enhances America's energy abundance," as part of a broader legislative agenda for the GOP to run on this fall and pursue under a Donald Trump White House. The plan calls for giving a green light to the Keystone XL oil pipeline from Canada, streamlining the approval process for hydropower and natural gas projects, and repealing all climate change regulations under U.S. EPA's Clean Air Act." Environment & Energy Daily

Is liability for toxic PFOA a reason why DuPont is restructuring?

In 2015, DuPont spun off most of its pollution liabilities into a new company, Chemours.

“One financial website recently put Chemours’s chances of bankruptcy at 50 percent. Another, Citron Research, went further, concluding in early June that Chemours is “a bankruptcy waiting to happen,” and likening DuPont’s “dump-off” of liabilities to its treatment of PFOA itself. “While chemical giant DuPont has spent 60 years dumping waste around its facilities, they have spent the past 11 months dumping this ‘toxic spinoff’ on Wall Street.” … Citron, which has been publishing for 15 years, concluded that the spinoff amounted to “complete securities fraud” and that Chemours is “the most morally and financially bankrupt company that we have ever witnessed.””

Sometimes, scientists spot a growing problem, the world takes corrective action, and the problem is avoided.

For example, in the 1970s and 80s, scientists noticed that chlorofluorocarbons (CFCs) such as freon were causing depletion of ozone in the upper atmosphere.

Wait, you might ask, aren’t CFC’s useful? And isn’t ozone poisonous? Yes and yes. CFCs were used as refrigerants and as propellents in aerosol cans (e.g. hair spray). And ozone, if inhaled, damages the lungs.

But there are alternatives to CFCs. And ozone in the upper atmosphere is natural. It is “earth’s natural sunscreen” that blocks most of the sun’s ultraviolet rays from hitting the earth. If ozone levels drop too low, more ultraviolet light gets through, and this UV light can cause DNA damage and skin cancer.

Scientists in the 70s and 80s predicted that continued use of CFCs would cause these very long-lasting CFC molecules to create an ozone hole over Antarctica that would grow in future decades and lead to increased skin cancer. So the world took action in 1987 by agreeing to the Montreal Protocols: CFCs were phased out over several years and replaced with safer chemicals.

In the last few years, scientists using computer simulations have calculated what the world would be like if people had not taken action, and CFCs hadn’t been phased out. “By midcentury, their simulations showed, the ozone hole would have covered the world, and at noon on a clear summer day in a city like New York, the UV index, a measure of the damage the sun can do, would have caused a noticeable sunburn on unprotected skin in 10 minutes.”

The predictions made by scientists in the 1970s and 80s have proven true. “Model projections suggest that ozone will return to 1980 levels between 2050 and 2070. The ozone hole has been an iconic feature, a testament to the possibility of unexpected and large impacts of anthropogenic actions on the environment. Its disappearance will symbolize the possibility of protecting Earth through cooperative actions.” 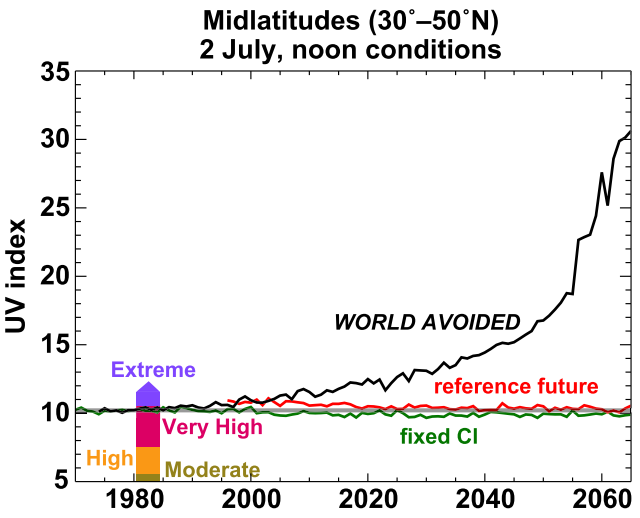 Now we need to take action in a similar manner to address global warming.