I was driving with a friend on route 221 through Greene County on Sunday to go bicycling on the Greene River trail near Rices Landing, and we found ourselves behind a brine water / residual waste truck -- presumably full of frack waste -- between Dunn Station and Ruff Creek.

1. The truck had no license plate!  The side of the truck said Curry Supply.

2. The truck often took up most of the road, creating a hazard for oncoming traffic.

3. There was severe road damage on route 221, perhaps from these wide, heavy frack trucks.  When I biked this road about two years ago, the edges of this road were not crumbling like this.  Damaged roads can cause a) crashes for bicyclists or motorcyclists, b) damage to car tires and suspensions, and c) additional safety problems as cars & trucks swerve to avoid holes in the road.

I'd like to visit Greene County again to go bicycling on its (formerly) nice roads but these safety issues make me think twice.  The gas industry should pay for their share of this road damage, since this appears to be so far beyond normal road wear.

Permalink Reply by Kathleen Elsie Gibbs on May 31, 2011 at 6:50pm
In most cases they do fix the roads. The only problem is that the don't keep them repaired but fix them when they are finished. In our case almost three years. Our road is better then it was before they came. Just takes awhile.

Permalink Reply by 0jw0dsu4txfuv on May 31, 2011 at 7:51pm
The roads are bonded in Greene County. We fix the roads and pay the county for useage.

Permalink Reply by 0jw0dsu4txfuv on May 31, 2011 at 8:43pm
That is my point. Those roads in Greene County were bad before drilling ever began.

Permalink Reply by Kathleen Elsie Gibbs on May 31, 2011 at 8:48pm
In our case we have not been logged. Ours is mostly open farm land.  Our road was repaired by Atlas and the money did not go to the local, county or state. As I said they did a good job when they finished with the seven wells on our road. We have one Marcellus and six other wells on our road already. There are seven more Marcellus permits but I am not sure how they will get to the drill sites or how many per pad. Logic says the state road but then it would be cheaper to fix our township road. So I just don't know.

I suspect all heavy trucks have to abide by the same rules, which basically are, or used to be:

You must take the route all on state roads to make the shortest use of the local roads.

Permalink Reply by 0jw0dsu4txfuv on June 1, 2011 at 5:59am
The cost for the county/state to fix the roads is double what can be done by a contractor.

Permalink Reply by Kathleen Elsie Gibbs on June 1, 2011 at 8:05am
Boy you can say that again and again. The road crew (even for our small township) is paid the prevailing wage of Pittsburgh/Philly. We are not a right to work state so everything is ruled by the union bosses which makes things bad for the public. I pray that the Congress passes a national right to work law (one of the few times I would like government regulation).

I biked route 221 in 2008 and the surface was not like this at all.  When you're bicycling you're very aware of the road surface, whether it's rough or smooth, clean or gravely, much more so than a car driver.  Whatever caused big chunks of route 221 between Prosperity and Ruff Creek to get worn away has happened mostly since 2008.  Has there been an increase in logging trucks as great as the increase in gas/fracking trucks, in those years?  Do the logging trucks weigh as much as frack trucks?

Jim Mills said "I very much doubt a gas or associated vehicle would be driving around without tags".  Well, this one was!  See the pictures! 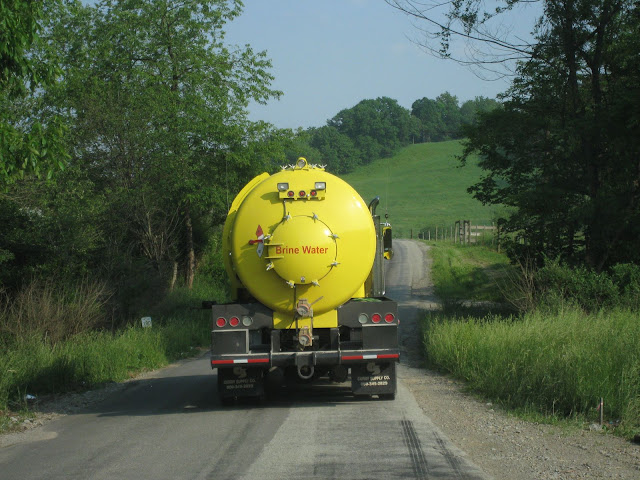 Country roads are just that country roads. They weren't made for lots of heavy trucks or bicycles for that matter. They were made for getting from point A to point B regardless of the roads' condition.  If the road you are talking about is the one in the picture, then count your blessings on having such a great country road.

That truck in the picture is abit less than 12  inches wider than my F250 ford truck, so the argument about taking up a lot more of the road is nonsense....you use common courtesy when driving on narrower country roads when approaching another vehicle, as I do everyday on the way to work. Pulling over and stopping happens frequently with two cars/trucks passing each other.

Also, that truck looks very very new....guess where the temporary license is supposed to be put by law....yep on the Cab window. I can't believe for a second that this truck isn't licensed...it would cost the company many thousands of dollars if caught...not that there aren't bad trucking companies out t here.

If the trucks did the damage, they will be fixing it or they will forfeit their bond on it. Of course the state will spend the money however they see fit and probably not on the roads that generated the money.

I have to say this, and don't take this personal please...but....Bicyclists have no business on a road that might be hazardous to them, period. Sometimes I wish for the days of the 60's-80's when our road was a dirt and gravel road...no bicycles, no motorcycles, no fancy pants cars, just farm tractors, trucks, ordinary cars, manure spreaders,etc and maybe a horse now and then. I don't want a paved road, street lights or municipal water...If i did i'd move.

Permalink Reply by 0jw0dsu4txfuv on June 1, 2011 at 5:57am
Very well put Craig. As a motorcycle rider I understand and appreciate Richard'comments. I drive down those roads all the time in my truck. No way would I ride my cycle there.

Permalink Reply by karen brown on June 9, 2011 at 3:40pm
Very well put Homer and Craig.  Lets recall several months ago the heavy rains and hard winter.  I live on a back road that is all washed out and we do not have active gas travel.  It came from headwalls not being cleaned out by state and townships so the water jumps the road and guess what, it still is not fixed also, all gas industry vehicles are paying fuel tax and a lot of it, where is that money going and by the way the roads used by the gas industry are in better shape than they have been in 25 years.  And to the bicyclist, ride in town, we country folk only care about tractors, point a to B etc.  If you want paved burms, lighting, curbs and good roads stay out of the country, this is the way we like it.  Also, stay out of the middle.

Permalink Reply by Kathleen Elsie Gibbs on June 1, 2011 at 8:12am
Well said. Those of us that live here (we don't take a car or truck to get to our country road we live here) now see joggers and bikers parked a couple of miles away and then they bike or jog out. LOL they get startled when they get about 1/4 mile past our place as there is no pavement just dirt, rocks and ruts. My grandkids bike there but then they have mountain bikes and know what to expect.