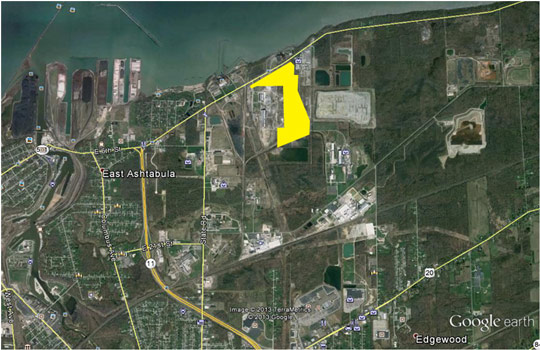 Thanks for the new info.

Looks like the rail road is very close to this plant !!

Just friended you, I just rec'd a new case from a trustee concerning interest in a parcel in Ashtabula.  Wonder if you may know where this piece is or any other info.

What kind of 'Trustee' ?

Don't think I can help in your quest for more info. but, feel free to PM me with clarifications (if you think for some reason I may be able to).

It puzzles me why you think I may be able to assist ?

The railroad used to serve the 2 idled coal electric plants and a large rail yard is nearby. If water transport proves feasible Lake Erie is right there also.

A rail runs right thru Dorset and hauls tons of coal practically daily.

Coal said to be shipped via Lake Erie (so I've been told).

There's a spur in Dorset as well on Railroad Street.

Don't know if that would / could be put to use.

Some gas and oil action would certainly make a difference to little Dorset I would think.

From what I've been told Timber established Dorset in the beginning and then things got real quiet for a long time.

Anybody out there know ?

Permalink Reply by Adal on September 5, 2014 at 7:21am
Others Had Moved On
First Permanent Settlers in Township Arrived
22 Years After Its Beginnings

By Catherine Ellsworth (1976)
It was some 22 years after its beginning before the first permanent settler began life in Dorset Township. There were earlier attempts, but these pioneers moved on to other parts of the Western Reserve.

In the summer of 1799, the Joel Thorpe family traveled 600 miles from Connecticut, through the wilderness, to the southwest part of the township. They suffered wilderness hardships for nearly three years before moving on to Cuyahoga County.

The Cowles family located one mile west of Dorset Center in 1812, remaining until 1817. In 1818, Asa Richardson exchanged his Vermont land for land here belonging to Judge Mills. He and his family lived here for some five years before moving on.

Official organization of the township occurred in 1824, with the name of Millsford chosen for the community. There is no record of why the name was changed to Dorset by legislative action in 1849. Early records of Dorset officials were destroyed when the town hall burned in 1932. It is known that Samuel Fox. Rufus Thompson and John Smith were elected trustees in 1928. Austin Burr was clerk; Lyman Larrabee, treasurer; and Hiram Bassett, constable.

Nathan Bassett and his son, William, carried forty trees on their backs from Denmark in 1835 to plant Dorset's first orchard on Lot 35. Bassett had also built the first brick kiln, in 1824 or 25.

It was not until 1840 that the first steam sawmill was built. The same John Smith, pioneer settler, began the operation, expanding it to include a gristmill. Until 1878, there was not another such mill in the township. Smith also built the first cider mill in 1842. He engaged in many endeavors, even building a great share of the road from Leon to Dorset Center, now known as Mells Road. He was paid 25 cents per rod for the work and $1 for a bridge.

Lumbering built the town of Dorset. The Rosa brothers moved the Cooperage Lumber Co. mill from Fort Wayne, Indiana, in 1890. The company produced barrel staves and heads from lumber taken from 2,000 acres of Dorset land. This land extended some one mile south of Tower Road to one mile north of Kyle Road. A "tram track," measuring nearly fifteen miles altogether, hauled the logs to the mill for processing. "Everybody worked for them," according to the old-timers. They did employ about eighty people, many of whom left when the works closed. It operated from 1890 to 1912. The timberland was bought for $6 and $7 an acre, the purchasers mainly being real estate agents from Indiana and Western Ohio. At this same time, there was much talk of a steel mill to be built in Conneaut, the same as today. This added to the rush to grab up Dorset land.

During this time, Mr. and Mrs. Harry McConnell operated the Republic Hotel. They often served meals to as many as seventy persons a day. This was the "boom time" for Dorset. There were two good-sized stores in Dorset, each with butcher shops. It is said each store would cut up and sell a whole beef each Saturday.

The railroad played a prominent part in the busy time, providing a passenger train every hour. It cost 15 cents to ride from Dorset to Jefferson. At different times, Dorset has boasted a variety of businesses since John Smith established the first store in 1857. There has been a hardware store, barbershop, mercantile company, creamery, cheese factory, charcoal kilns and sawmills. The railroad was big business for a time, paying almost one-third of Dorset's taxes.

Thanks for taking the time to compile and post.

For me an interesting report.

I was told a while ago from a local that the train goes to Fremont Ohio. Do not know why.

Tracked it north on Google Earth and saw where a line splits off to the west and another continues north and then east to Ashtabula.