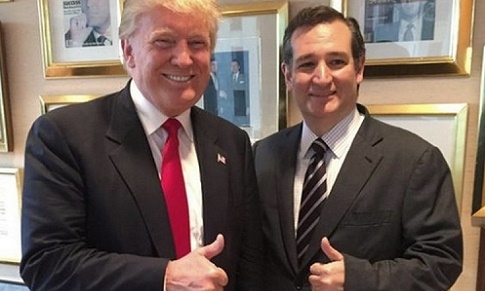 This OpEd originally appeared in the QCtimes.com

It was a good year for “The Donald” in 1987. For those who haven’t caught up on Trump trivia, that was the year his beloved Art of the Deal was published, a book which Trump has ranked second only to the Bible. Based on Trump’s recent comments regarding ethanol and energy, one has to wonder whether Trump ever left the 80s.

Recently, during a series of coordinated events perhaps schemed over during a few hours in an Iowa deer stand, Gov. Terry Branstad issued a political fatwa against Sen. Ted Cruz, stating that “he hasn’t supported renewable fuels, and I think it would be a big mistake for Iowa to support him.” Trump later in the day followed up with a call for an actual increase in ethanol use, stating that ethanol “reduces dependence on imported oil, which helps energy independence.”

No doubt this is good ol’ fashioned politicking on Trump’s part. Trump was running behind Cruz ahead of the caucuses, and he needed a new angle from which to attack. Political winds or not, it is mind-bending that Trump would glom-on to an energy narrative that is so, well, 1987. Consider what has changed since then.

Gasoline prices are the lowest in about 10 years. My local station is selling gasoline for $1.64 a gallon. How about yours? According to AAA, the national average gasoline price has fallen below $2 a gallon for the first time since March 2009.

The United States is swimming in crude oil, the commodity used to refine gasoline. There is so much oil, in fact, that the federal government has ended the oil export ban enacted in 1975. ConocoPhillips and NuStar Energy loaded a tanker with U.S. crude oil just after the ban was lifted to test the export waters, so to speak.

Oil prices have fallen below $30 a barrel, which is troubling for drillers but great news for consumers who have seen wages lag behind the economic recovery. Economists say that for every penny decline in the price of gasoline, about $1 billion is freed up to be spent on things other than fuel. That helps to stimulate the economy, which judging from the stock market and the number of Americans who continue to be out-of-work, could be beneficial to everyone these days.

Natural gas prices also are at historic lows, resulting in lower heating costs for consumers as well as reduced costs for manufacturers. This, too, is likely to lower the financial burden on American households.

This good economic and energy news for consumers is not the result of politics or government mandated ethanol production; rather it is the direct result America’s shale energy boom. By using advanced technologies to produce huge amounts of domestic oil and natural gas, the United States has become the world’s largest oil and gas producer.

Due to shale energy development, U.S. crude oil production growth in 2014 was the largest in more than 100 years, increasing by 1.2 million barrels per day to a total of 8.7 million barrels per day. During the past five years, U.S. natural gas production climbed by 13.9 billion cubic feet per day, outstripping both Russia and Saudi Arabia which now are the second and third largest hydrocarbon producers.

With shale energy helping to move the United Stated toward energy independence, there is no good reason to continue the ethanol mandate. That doesn’t mean it will no longer be used in fuel. Ethanol boosts octane in gasoline and is an excellent additive. But too much of a good thing can cause problems.

Consumers worry that gasoline containing more than 10 percent ethanol could void their vehicles’ warranties, and they are concerned about ethanol’s impact on food prices and world hunger. In 2012, during the drought, about 40 percent of the corn crop was used to make ethanol rather than feeding consumers.

Although Gov. Branstad’s and Trump’s grandstanding about the ethanol mandate might be good politics in Iowa, it is not the best course of action for the country. And presidential candidates should acknowledge the importance of shale development to energy independence; a sentiment Trump will be forced to acknowledge after he’s done kissing babies in Iowa. The ethanol mandate should be repealed.

Keith Mauck, J.D., is publisher of GoMarcellusShale.com and co-founder of ShaleCast.com.

A  progressive shale oil policy is the foundation for a resurgence in manufacturing.  Low cost energy independent of mideastern oil coupled with restructuring of global trade policies that benefit United States manufacturing will bring about  a new manufacturing boom the likes of which has not been seen in decades.  The political support behind TRUMP being successful is the key to this policy.  A Democratic win with Hillary Clinton will put off this program for decades.  The party of MORE MORE MORE,MORE OF EVERYTHING will bancrupt this country faster than the inevitable CRASH. Trump is trying to make TRUMP great again and he is willing to take some of us along, he can't move his buildings off-shore like his other billionaire friends.