Now that the leasing is about over, some are expiring,or expired,those that have wells that have declined in production,royalties that have been reduced,or been tapped by illegal deductions, pipeline rows $ gone, what are landowners going to do for the income that they have been counting on every month, or bonus $ that has been used up?  I suppose that agricultural crops are the answer. hay/corn/beans/timber. with China committing to $50 billion worth of ag imports from the US, it may be time to start counting on crops again. A lot of landowners are not farmers, but they do have a timber crop. harvest every 25 years or so. I've heard this guy /link/has been getting landowners in Guernsey and surrounding counties much better prices than they've been used to. 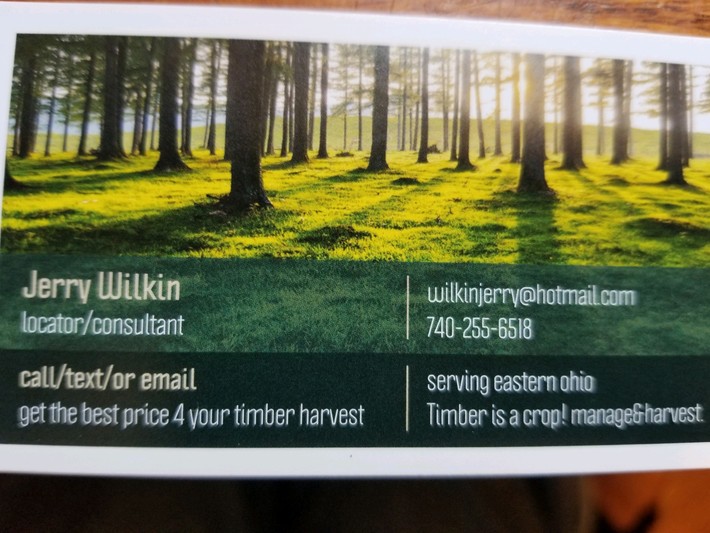 Probably he cant do very much except to learn something about logging!  And be on the scene when logs are scaled up and marked. It is very easy for a buyer to short change on the scaling, (measurement of size), and quality of the log.  Ash usually grows very straight and quiet tall.

Best to get get paid 100% of the $$$ BEFORE the logging begins.Landowners would be better off not getting too involved with the bidding process. logging co.s like to lowball landowners like oil co.s do when talking about leases. get a consultant. their commission may be paid by the mill. it's a win/win

This is where a consultant can help.They can handle the bidding and eliminate some of the lowballing going on. Multiple bidders are good,but not if they know each other and are working together to keep prices lower than they should be. It's almost like the leasing of oil&gas ,if you don't use a lawyer to negotiate the deal with the oil co. you WILL get screwed! Takes a lot of the work and time out of it for the landowner also. time better spent going to the bank.

Permalink Reply by shakeshale on October 28, 2019 at 5:02pm
Look at what farmers are doing in California Oregon Colorado Kentucky Pennsylvania
It’s called HEMP a crop that has multiple uses and is growing larger every day in all the states that legalized cultivation
Of course here in Ohio we are behind the times as usual to a growing nationwide trend
The CBD and other compounds extracted from the Hemp plant have proved to be effective in stopping seizures in young children
See Epodilex G W Pharmaceuticals
Ohio has yet to establish rules or regulations for the 2020 crop season but should release information soon
It’s not for everyone but for some especially in Kentucky and Colorado it’s really paid off
One farming family grew 72 acres of hemp and after all costs came out with profits of $275,000.00
This was their third year growing hemp
Go on LinkedIn and look at all the activity around Hemp and CBD
It’s not far off for Ohio we are already forming associations and groups to grow hemp also seeking drying and extraction facilities
There will be a lot of ancillary jobs also
A big win win now that oil and gas is going back to pre 2010 levels

If I was a farmer; I"d be definitely looking into that!

Permalink Reply by shakeshale on October 28, 2019 at 5:06pm
As far as selling minerals yes you can
But it’s a buyers market
They know when people are in a squeeze and will buy what and where they want at their price
Most have what they want and have moved in to Permian Basin or Bakken
Oil plays

The potential wealth of O&G and NGLs are just beginning to be tapped. I'm not buying what you are selling.

Well pads still have 4 and more Horizontal Wells to be drilled in order to make all Ohio Counties look like the areas of Carroll County with all land covered with Horizontals in order to collect all of the well products in each area.

Western Counties have Oil that will be drilled for deep into Western Ohio.

Wells are producing larger volumes of Oil than are being reported and many wells have been falsely declared dry of Oil while Natural Gas and NGLs continue to flow at record volumes, also not being reported. Utica Well decline curves show that all products decline together over 5 years then level off at 10% of the initial volume produced.Oil doesn't nose dive to zero unless the producer has a Well sale in mind.

The Oil decays to Natural Gas and Natural Gas Liquids which is why these 3 products decline together. Oil has been fraudulently reported to decline to Zero in less than two years, this is what O&G companies do, they want it all.

When well flow drops off, Horizontals can be re-fracked to increase production. Also both the Utica and Point Pleasant shale plays have not been tapped into yet. Some Wells are Point Pleasant and some are Utica layer wells.

There are many acres where oil was struck at 900 feet, and sealed off in order to continue down to the 8,000 foot level. Those wells can be drained by a traditional deep well. I have Landowners who have told me about what products were found and at what depth.

You have all seen the Executive Order that I have provided that will ensure future royalties are paid fairly.

To repeat, we have only just begun to see the True potential wealth that will give Ohio and it's Citizens the Bright Future that was promised before the theft began. What has been is about to change.

Farm because You want to, and don't worry about farming until the money runs out, I doubt that it ever will.

Plus all of the Right of Way contracts are void, which means the money that was flowing to Oklahoma to Chesapeake/Cardinal Gas Service will now flow to Ohio and it's Citizens.  This will become obvious one day soon.  O&G Leases and ROW Contracts are Real Estate Contracts per The Ohio Supreme Court. Those Landowners who signed any document related to O&G before May 2019 without a Licensed Ohio Real Estate Agent negotiating the deal have a void document due to a violation of Ohio Law. Those who were lied to in order to get a signature on an O&G document, experienced Deception In Writings, which says any monetary transaction related to an Ohioan Land must be told the Truth when signing a document, and that doesn't happen when dealing with O&G people.

Those laws are on vacation today, but will resurface when Corruption In The US is no longer the norm.

Get Your Popcorn Ready, the show has begun, soon to be in a City Near You.

I hope you are right, And I'm not a pessimist. But you may be living in a fantasy world?