DEP knew of public water contamination from drilling and fracking in Coudersport, but told no one

One Year Later: Officials Found Drilling Chemicals in Public Water, But Told No One

"One year ago, on September 24, 2015, a new company owned by billionaire Terry Pegula — JKLM Energy — announced that it had contaminated private drinking water supplies while drilling for natural gas in Potter County, Pennsylvania. ... Public Herald has uncovered evidence that, from the very beginning, JKLM Energy and DEP officials knew contaminants were detected in public drinking water, but told no one. ...

In 2015, an October 7th email to JKLM representatives obtained by Public Herald, PA DEP Program Manager Jennifer Means wrote: “We…noticed the detects of MBAS and acetone in the hospital spring, and BTEX in Coudersport’s Well 1..."

BTEX — benzene, toluene, ethylbenzene and xylene — are a group of carcinogenic compounds that can damage human health. The chemicals are often in fluids for fracking, and have been detected at high volumes returning back to the surface as ‘flowback’ — or wastewater."

It’s important to remember the Public Herald isn’t really a news gathering organization, but an anti-gas advocacy group who is calling for a federal criminal investigation into the Pennsylvania Department of Environmental Protection. They remain fixated on the JKLM problem from 2015 despite that well having been plugged some time ago. They are not in this to help the environment or mitigate global warming (if they were, they would be going after coal producers and consumers) but to make a name for themselves.

To quote a highly-placed friend in a major environmental organization, anti-gas groups like Public Herald are “the biggest threats to global warming that we face” since they have managed to derail the rapid conversion of our electric power generating system from coal to natural gas. Thus the best short to medium term option for reducing greenhouse gas emissions has been missed, something we will all pay for dearly one day.

They mean well, I’m sure, but their misguided attacks on natural gas have only made our environmental problems worse. So in the future please do some due diligence before you post reports from groups like this claiming it to be “news”.

Didn't they just take in the equivalent of $1.16 an acre as repayment for theft on 860,000 acres of public land. The number of acres slips my mind, it could have been 68,000 acres on the low side making the amount closer to $10 and change.

PA Citizens might want to request an audit to see how much was actually stolen from public lands.

It's wise to face the truth that when a Department of a state hides anything from it's Citizens there's a probability that the same Department may be hiding other things in order to keep their jobs.

It's human nature to do what it takes to keep a good paying job with healthcare and a retirement. They are so hard to find these days.

Sounds to me like a gasoline storage tank release. BTEX is a common  product of gasoline and groundwater the acetone is a decay product of MTBE and some chlorinated  compounds.  I spent 20 years in Ohio making the Gasoline filling stations clean up their releases from Tanks lines and dispenser spills. Go to the Pen DEP site and just look at the releases from gasoline service stations in the area . another source is the gasoline distribution pipeline and tanker terminals. You and the Penn laws presume the source is from oil & gas Exploration and producton unless the producer can prove other wise. so it was just cheeper to plug the well than fight it.

Raymond, Thanks for the informed reply.

Raymond: this is not primarily a case of pollutants appearing and people speculating about their possible source. It is more a case of a known leak during drilling, followed by efforts to find (or cover up) the consequences.

"Cole Memorial Hospital, Coudersport Borough and at least six residences have switched water sources after a chemical spill contaminated groundwater during drilling operations by JKLM Energy LLC this week.
On Thursday, JKLM Energy LLC released information on the company’s ongoing efforts to respond to an incident from Friday in which a surfactant solution used in the drilling and completion of natural gas wells is believed to have migrated into shallow subsurface and groundwater at the Reese Hollow 118 Pad located off Burrows Road in Sweden Township.
Surfactants are also referred to as “foaming agents” or “soap.”
The migration was discovered following the use of the surfactant to free a broken drill bit piece in the well at 570 feet below ground, according to JKLM representatives.
JKLM personnel and the state Department of Environmental Protection are conducting an intensive investigation, which includes taking duplicative water samples, to mitigate the effect of the release on local public and private water supplies.
While no one involved believes their water sources to have been contaminated, Cole Memorial Hospital and Coudersport Borough have switched to alternate water sources as a precautionary measure, according to Neil Shader, DEP press secretary.
Shader said there have been six homeowners that have raised issues about contaminated water. “Some of them have identified foam-type substance in their water, while others are just within the expected impact zone and are being supplied with other water,” Shader explained."

Blaming the O&G companies for anything that shows up in the Appalachian Basin is a wise choice.

Knowing that O&G companies do what they want with no penalty regardless of the laws broken, they are the most likely suspects for the increase in Heart Attacks, Strokes, and other health issues where ever they operate. They donate plenty of money to those who can keep the problems out of the News.

Everything is fine in the oil patch as long as the well products are moving and the money is properly distributed.

Here's the Executive Director of the outfit that helped write this mixed up craziness of an article: 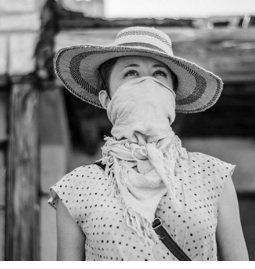 I believe she is standing in downtown Hiroshima, per the background in the picture. That explains the makeshift filter/shawl.

Imagine the size and the scope of what would be a massive cover up requiring layers of conspiracy with complicity from so many people from every entity referred to in the "article".

This is why there is so much distrust of environmentalist's and environmentalism in general. They shade, imply and obfuscate but when you boil this matter down to the nuts and bolts I didn't see where anyone had anything more sever than a tummy ache that could have been from anything.

Most environmentalists are really leftists and leftists endeavor to rule men's lives, period, shrouded in the illegitimate perception of caring for the environment and people.

At the end of the day there are massive amounts of energy that are obviously needed or they wouldn't be sold at a profit after the high costs of production. All is done with with almost imperceptible adverse effects that you can put your finger on.

And, there is no replacement for these obviously necessary energies.

Truly this thread, as with most of the authors other threads have nothing to do with the subject in any way of any real interest of the vast, vast majority of people who come here for meaningful information.

Aren't there a plethora of environmentalism blogs where people can go if they desire to read this kind of opinion ?

Reading the article linked, it is intentionally misleading to make it appear that the contamination came from fracking the well. If true it would be the first time ever that chemicals from a mile deep traveled through a mile of vertical rock and three miles horizontally.

But it turns out the fluids were introduced to free up a well bit that had gotten stuck at only 570 feet deep....or right in the water table. They never should have used such chemicals to dislodge a stuck bit at that depth but it has no bearing on fracking or even deep drilling.

Bits get stuck all the time even in shallow vertical drilling. They use various methods to free the bits but no one should use toxic chemicals to attempt such in or near the water table.

Once again, the antis lie, distort and mislead.  Then they wonder why their complaints never seem to get traction or why the public is not in an uproar. They blame it on a vast conspiracy of evil big oil payoffs to dirty government officials. But maybe the real reason is that the green weenie leftists have lied, misled and distorted for so long that they now have zero credibility.

Permalink Reply by TreeMom on October 6, 2016 at 1:25am
I think Paul provides us useful information. Saying that drilling the well is not related to fracking is an esoteric argument, in the public's eye fracking is the whole process from clearing the pad to fracking. When companies make a mess they need to clean it up and the public has a right to know. We need responsible companies and responsible government in this sector. If this does not work for the local residents it does not work for anyone.