Everyone knows that times are tough. I'm just wondering have land owners experienced their royalties either being cut off entirely or reduced drastically. What services or companies do you use to make sure you are getting paid the correct amount and are not having unnecessary deductions taken out of your royalties?

How are people dealing with the reductions in royalty payments, what other ways are you generating cash flow to offset royalty losses?

Yes! If you were trolling this site the last few months,you would know that all landowners in producing units have seen their royalty payments go WAY down,and some have seen them cut off completely by wells being shut-in,or by producers taking illegal deductions.Some are even having to PAY BACK what royalties they have gotten to producers who claim they paid them too much! Royalty payment sheets are really hard to decipher by most,so that leaves you with contracting the services of an attorney,or an accountant. Audits are really expensive,so unless you have a lot of acreage,that may cost more than its worth. Some have resorted to lawsuits,but unless its a part of a class action suit, that may also cost more than its worth.  As far as cashflow, I cant believe anyone would actually count on royalties as a steady income and base their budget on this flow of $$$. 6 years ago ,the thought of getting any $ from oil&gas royalties would have been a shot in the dark. When landmen 1st started coming around,any $ that they promised was considered "found money" , or a "lucky me" scenario. I feel sorry for anyone who is actually counting on this $ as income month after month.

Permalink Reply by Tom Mackenzie on February 19, 2016 at 10:02am
Thanks for your thorough response. People have really had to pay back royalties?

True, Tom.  I know people who were getting royalties for bout 7 months,then the payments stopped because the producer thought they should have been taking deductions all along,so they are withholding royalties until that $ has been paid back.According to their lease,No deductions are suppose to be taken out, It's like  driller  is says,"sue me ,if you don't like it".

This subject is going to get covered extensively at the NARO Barnesville, Ohio event on Feb. 27th.

Is it to late to sign up for that event?

Registration is still open.  The link is posted in the NARO Barnesville topic on the main page.

Okay thanks to the both of you. You've been a big help. Are you a land owner your self Becky or do you work for Naro?

I am a landowner and a NARO member.

If you ask someone who has lived through the various domestic oil and gas booms, such as the 1960s in West Virginia, you will find that O&G companies have been short changing (committing theft) against Landowners from the first oil wells in the 1800s.

I saw a rerun of the Honey Mooners from 1950 where Jackie Gleason joked about something that was crooked in his neighborhood by comparing it to playing poker with Oil & Gas producers.

So, if you can find the oldest person in your area, ask them what they think about the ETHICS of O&G Companies, Producers, Land Men & Women, Pipeline ROWs, anything to do with domestic O&G and you'll be shocked to find this is nothing new. Apparently most people who know the truth are no longer with us.

My Mother In Law showed me a royalty statement in the early 90s from Oil being taken from a well in WV.

The annual check was less than $30.

My Neighbors will tell you that the land people that came through our neighborhood only lied when their lips were moving. One Neighbor asked why the landman who was hanging out in this area was telling the neighborhood she had signed with him when she was still unsigned. His lips started moving and he said he wasn't spreading that rumor.

You might say "Something Old
(Royalty theft from landowners), Looks New Again! (You don't think we are being slightly under paid?).

The truth will eventually be known that were making 10% of the 12% Net plus deductions for the worst lease in our units, before royalties were further withheld to save each of the producers we are leased to during the OPEC induced oil crash. We should send them a Thank You card for saving our well products by slowing down the drilling. No US entity could or would take on Chesapeake on behalf of the landowners, that counties across the US are leaning on heavily to make up for a tax shortfall due to several issues including the new Health Care Rip Off that landowners are being asked to pay for, for all of those county employees.

It's so bad that we are now going on 5 months of production from a well drilled in March 2015 with no Division Order. For some reason the well didn't produce until October 2015, or at least that's the story being told by our producer.

The laws of Ohio truly don't apply to Oil & Gas companies, since no one has the backbone to enforce the laws. We all signed leases after being told that the ODNR would protect us.

When you hear that elected officials in Ohio have come into some money in 2011& 2012, it more than likely was from each of our wells & shorted royalty payments.

Evidence of the Ohio Theft In Progress is in the Hope Christian Fellowship vs Chesapeake Energy Complaint/Lawsuit.

Evidence of the PA Theft in Progress is in the PA Atty General vs Chesapeake Energy Complaint/Lawsuit.

For everyone else, remember "If They're Drillin, They're Stealin". A well kept secret but fact of life in the US.

Those who call me a "Whiner", don't own land under production or work in the O&G industry. 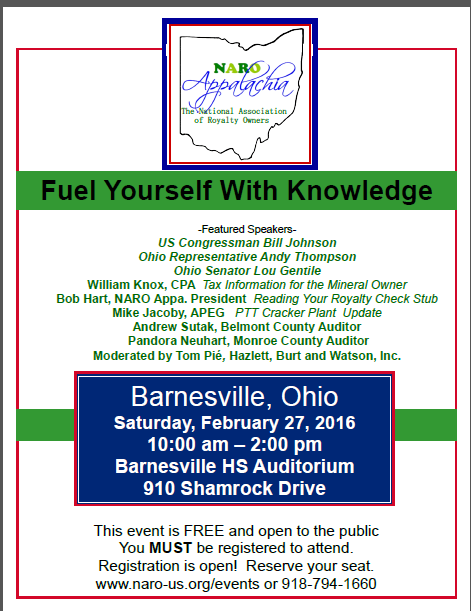 Folks, while this event is in Belmont County Ohio folks from any location can attend.   And NARO stands for National Association of Royalty Owners.   Longtime members of this group have experience and great insight into the royalty payment situation.   I learned at the first NARO meeting I attended that a standard royalty statement could have been negotiated into the original lease.    How many of us in OH, PA and WV have that?  Our three state area needs to actively work together for honest respectful treatment of landowners.

Here is a real hotlink to the registration.    Sorry about the other one that turns out to be only a picture.